Home » AMERICAN IDOL Recap: Erika Van Pelt is out – change your hair and get a swift boot 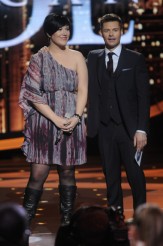 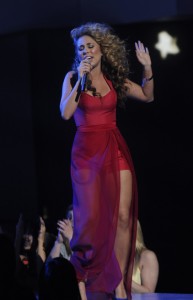 It was decision time again on the world’s greatest karaoke competition, AMERICAN IDOL, with the big question being would any of those that deserve to be in the bottom actually be there?

Of course, by now, you know it was Erica Van Pelt that was given the unceremonious boot. With Heejun Han and DeAndre Brackensick in the bottom.

But before we go any further …

Rant time: Excuse me, while I get this off my chest. So Haley Reinhart. Pretty good for a chick that was eliminated before some of the other schlock that actually made it to the finals and eventually won – Scotty McCreery I guess is doing alright. But her performance goes to show that maybe America actually gets it wrong sometimes. Reinhart has a great style and voice and she proves that she is marketable despite not winning or even sniffing the finals last year. What’s worse is that what we got was completely different from anything she dared to do on the show last year. Well, more likely was given the chance to do. They pigeonhole a lot of these performers into what they think is the best when the reality may be their own style and their own decisions may actually be better. Proof in what Reinhart delivered with her first studio song “Free,” which is pretty darn good. Think what she could have been if she was given a fair shake on the show and allowed to do what she is best at? Who knows what would have happened. 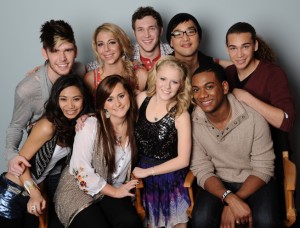 So I will get to the results how they happened. As always I’ll spare you the fluff that included a pretty awful group Billy Joel song, Lana Del Rey looking to prove her SNL disaster was a fluke and failing (she’s still hot), another lame Ford music video, loads of unneeded drama, Jimmy Iovine giving his smackdown, a happy birthday to Steven Tyler,

First they called down Hollie Cavanaugh, Elise Testone and Skylar “hillbilly hoedown” Laine. After some trickery, all three are safe. Nice to see that America got it right with keeping Elise out of the bottom this week as she is one of the stronger performers this year, despite a hiccup or two. I guess it is possible to escape the bottom once you’ve been there a few times.

Next up was DeAndre Brackensick, Joshua Ledet and Jessica Sanchez. Jessica (a no brainer) is safe. Joshua is also safe. Meaning, DeAndre is in the bottom.

The bottom three awaiting their fate, DeAndre is told he is safe. Heejun is also safe. Erica is voted off. As I pointed out in my review of IDOL this week, the whole making her a different looking person just was a bad, bad decision. You take a chick already in the hole from being in the bottom then you make voters question who the hell she is by changing her look radically. Not smart at all. No wonder she was voted off.