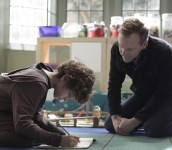 A solid second episode for a promising new series

I was a big fan of the pilot presentation of TOUCH. It brought Kiefer Sutherland back to Fox after his long stint on 24, it had a compelling, positive story from HEROES creator Tim Kring and it proved that challenging, interesting and different storytelling does have a place on network television.

However, delivering in a pilot and delivering on a week to week basis are two separate things. Thankfully, the official series premiere of TOUCH, “1+1=3” is just as engaging as the Pilot.

The story follows Sutherland as dad Martin Bohm to a slightly autistic child named Jake (David Mazouz). Jake has never spoken, but he has an uncanny obsession with numbers. The first episode, we discover Jake is finally trying to connect with his dad through the numbers – and trying to get him to solve a big mystery connecting a myriad of different people.

The series is essentially saying in its own New Agey sort of way, “we’re all connected,” and during this second episode, the Danny Glover character Arthur Teller explains further that there are things that have went off track in the universe and it’s now up to Martin to help his son make them right.

Added to the mix is social worker Clea (Gugu Mbatha-Raw) who has also seen the power of Jake’s numbers fixation.

“1+1=3” connects a former baseball vendor to a flight attendant, to a Russian mobster in the Bronx, the Russian’s outcast son, a pawn shop owner and a man from India looking to spread the ashes of his father on a baseball field.

Like the pilot, writer and creator Kring weaves all these elements effortlessly – with a sweet and touching pay-off by episode’s end.

Anchoring the series is Sutherland. This show would not work without his participation and he’s surrounding by an engaging actor with Mazouz who does a great job even though he only speaks via voiceover.

The role of Clea is a bit of a nuisance and not as fully integrated as it should. The character will need to be more proactive during the first season of the show to warrant her existence, because as of now, it’s the Sutherland show.

Now here are some of the minor problems with TOUCH. Sutherland spent so much time on 24 as the unstoppable Jack Bauer, it’s very difficult to except when he takes a punch from someone and gets hurt. Yes, it’s a different show, but Sutherland made Bauer to iconic, and this strangely takes you out of things on occasion. Just stop doing it and that solves this minor problem.

The other issue comes from Martin roughing people up to convince them his son feels they’re connected to something much bigger. It worked with Sutherland was roughing up terrorists, but every day people makes it seem a little brutal (and criminal). There’s got to be a better way. Maybe handing out business cards would make more sense? (Joking of course).

The other issue revolves around the social services building where Jake has been taken to in the last two episodes – he’s escaped TWICE now. Really? The security is that lax? Come on? Lose this subplot. It’s not necessary. We know Jake and Martin are going to work together to solve these weekly disturbances in the numbers Force, so leave it at that.

These are minor grievances however. The show is still finding itself and its rhythms, but so far so good. Two episodes in, and it’s a fresh and engaging series. There are many more stories to tell and if Kring and his team of writers can keep coming up with these great, complex, intertwining stories, it could prove to be one of the most original breakout series on broadcast television since, well, 24.

Article: Exclusive Interview with TOUCH star Kiefer Sutherland on his new series and the 24 movie