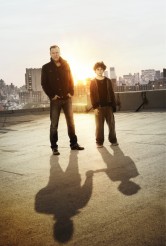 This winter, Kiefer Sutherland returns to Fox network with the new genre series TOUCH playing Martin Bohm, a widowed father trying to communicate with his autistic 11-year old son (David Mazouz) who he discovers has the ability to discover unlikely numerical patterns that connect life on the planet. The show is created by Tim Kring (HEROES).

While speaking at today’s FOX TCA press session, Sutherland spoke about jumping into the role of Bohm after wrapping up eight years of playing Jack Bauer on the Fox TV series 24.

“[TOUCH] was unbelievably appealing, because it was so different, and I emotionally responded to the piece that by the end of it, if they would have me, this is something I wanted to do,” says Sutherland. “I chose to do this piece  because it did profoundly affect me. It also happened to be a nice diversion from 24, yes. The choice and reason I made choice was because it spoke to me. In the case of 24, it was eight years. If you’re going to do something for potentially another eight years, you want it to be something you can sink your teeth into and interesting for that next period of time. Even though this series offers many opportunities to play a different character, the real choice to do this was not getting away from 24. The reason I couldn’t turn it down was it spoke to me on a really profound level”

TOUCH will have a special preview airing on Wednesday, January 25 at 9:00 pm after AMERICAN IDOL and will settle into Sutherland’s old 24 timeslot, Mondays at 9:00 pm, starting March 19.