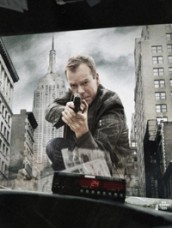 Fans of 24 have been waiting patiently for two years for the official greenlight of a movie based on the hit Fox series 24 and at today’s Fox TCA press session to promote his new Fox series TOUCH, Sutherland confirmed that the movie is now on the fast track.

“Hopefully we’ll be shooting end of April, beginning of May,” says Sutherland.

It’s not much, but it’s exciting to think the clock hasn’t stopped for Jack Bauer.