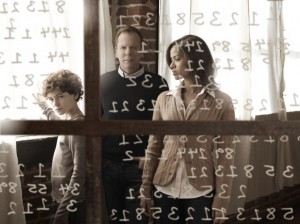 Fox’s new series TOUCH brings star Kiefer Sutherland back to the network after his eight seasons there as the iconic Jack Bauer on 24. Fighting terrorists is not in this show’s vocabulary – instead it’s a show that centers on a father and child, but has an unusual twist.

Created by Tim King (HEROES), TOUCH  features Sutherland as widower Martin Bohm wants desperately to understand his eleven-year-old son Jake, played by David Mazouz, who speaks to the audience in voiceover, but has never communicated verbally with anyone in his entire life. As Martin discovers in the first episode, Jake is not autistic – instead, the boy has an uncommon gift that allows him to see how seemingly random incidents and people are critically connected. The series will air Mondays at 9 PM starting March 19. A special preview episode has just aired.

When we meet Martin, he’s an airport baggage handler. Sutherland explains his character’s past to reporters in this way. “He was an investigative journalist, which has allowed him some tools to a) get into places where he might not supposed to be. It’s also going to give him a level of insight and a kind of a bullshit meter I think that’s going to work in handy. And also there was a storyline that I like that I think will be re-introduced, which is why he lost his job as a journalist, which was [that] he was fired because he vouched that there was evidence that he didn’t have yet. He believed that he had it, but he didn’t have it, and when he couldn’t obtain it, he was in a lot of trouble.”

Briefly alone at a party Fox is throwing for the Television Critics Association, Sutherland cordially takes time to give a one on one interview to Assignment X. 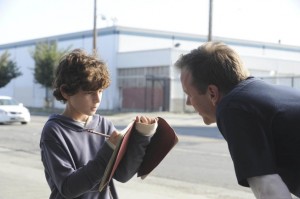 ASSIGNMENT X: You have said that the script for TOUCH really resonated with you. Were there things in it that you read and felt, “Wow, I’ve actually thought about things being connected in this way, and here’s a script that articulates that”?

KIEFER SUTHERLAND: Not in that context, no. In the design of the show, I thought it was very clever. I thought it was beautiful writing to bring five storylines together like that. What really resonated with me was a parent feeling that alone and doing the best he could, and still feeling that it wasn’t even close to being good enough. That resonated with me, because even though this was a heightened experience, I think every parent on some level feels like that at some point, and the relationship dynamic between the father and the son broke my heart.

AX: Obviously, over the course of 24 and in other projects, you’ve played a lot of scenes where somebody isn’t responding to your character as your character would wish. Is it particularly difficult doing scenes like the ones you have with David Mazouz, where because of Jake’s nature, he’s not allowed to make eye contact with you or interact with you the way a more conventional scene partner would?

SUTHERLAND: It’s difficult until you do it. If we had a real problem in this area, I don’t think I’d be standing here [talking about TOUCH]. I feel confident about our show. I have a very unique kind of response to David and I think he has to me as well, and I believe that we figured out how to show that we are communicating on some level, without verbalizing it, without physicalizing it. I do believe that there’s a stronger connection between he and I than he and any other character in the show. And there is no dialogue to base that on, that’s just the way he is. I think that he’s extraordinary, and it’s a real natural gift that he has. He doesn’t force anything, he just kind of walks on the set and he does his stuff. Minimalism is hard, you know. So I was very scared of those scenes in the beginning, of making sure that the tone was right, feeling that they were right. But I think we’ve eased into a kind of a groove, he and I, together, so I feel confident about that. 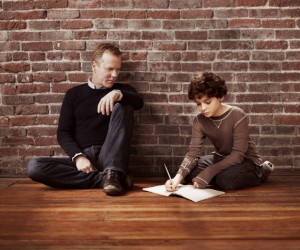 AX: After you wrapped filming on the last episode of 24, you made your Broadway debut in the 2011 revival of Jason Miller’s THAT CHAMPIONSHIP SEASON. How was going back to the stage? How long had it been since you had last done theatre?

SUTHERLAND: Ten years? I’d done THE GLASS MENAGERIE before that for about six months up at the Royal Alex up in Canada and the National Arts Center. If you’re going to wait every ten years to do something like that, and especially both those kinds of plays that have such a prestigious and historical background, if there’s anything you want to put the fear of God into you, that’ll do it, and so it wakes you up in a really strong way. But I also felt a great deal of trust with the rest of the cast that I was working with [in THAT CHAMPIONSHIP SEASON – Brian Cox, Jim Gaffigan, Chris Noth, Jason Patric, David Garrison] and I had an extraordinary time.

AX: You’re due to return to playing Jack Bauer in the 24 feature film when you wrap this season of TOUCH. Do you think it’s going to be difficult to get back into Jack, or is that going to be like putting on your old shoes? 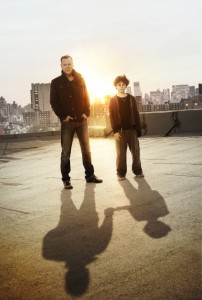 SUTHERLAND: Yeah, I’ll be scared to death the first couple days, but in all fairness, for me, that’s like going home.

AX: Is there anything else you would like to say about TOUCH right now?

Click On Link: Review of 24 – THE COMPLETE FINAL SEASON DVD