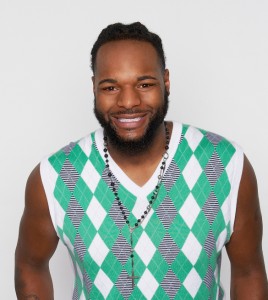 It was a controversial world’s greatest karaoke competition, AMERICAN IDOL, as contestant Jermaine Jones was booted from the show because of a past run-in with law enforcement.

While this is indeed an interesting development as I guess he lied to the producers among other things (don’t they do background checks anymore?), the more interesting thing to me is that they didn’t replace him with anyone. I think bringing back Jeremy Rosado would be a bad choice since he got the boot already and didn’t get voted in to the Top-10 originally but what about Reed Grimm or Adam Brock? They would have been good replacements. But I guess that means everyone moves up a peg for free.

This week the karaoke kids are singing songs from the year that they were born – which had quite the range.

So let’s enter this wretched hive of scum and villainy and get this force choke started. 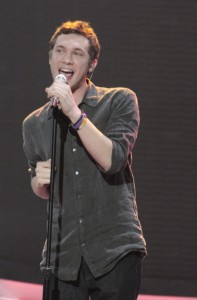 Phillip Phillips
Song: “Hard to Handle” by Otis Redding
What I Thought: For a dude that had surgery this week, it certainly didn’t show in his performance. While I think the ladies will still overshadow him in the long run. Phil will be around for a while given his talent and swagger on stage. However, stranger things have happened as the ladies certainly love him.
What the Judges Thought: Randy thought it was amazing. Jennifer said it proves he is a natural talent. Steven said he picks songs that match his character.
Grade: B 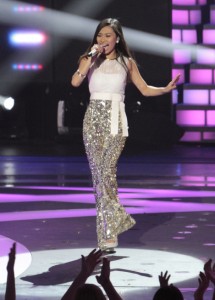 Jessica Sanchez
Song: “Turn the Beat Around” by Gloria Estefan
What I Thought: Jessica will probably be one of the favorites long into the competition but I foresee one of the “shocking” twists from the show in which she is eliminated when there are about seven or eight left. That’s not to say she is a great singer and she is. She’s got all the talents needed to win but I think she’s gonna be the shocker we see happen. The song was so-so and was a bit forced it seemed.
What the Judges Thought: Steven loves her voice but thinks she shouldn’t sway too far from the balance of her singing. Jennifer agreed with Steven that she lagged a bit behind the song. Randy thought she needed to control herself more.
Grade: C+ 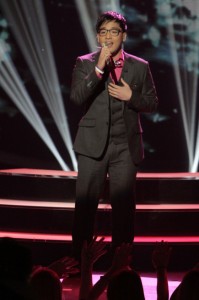 Heejun Han
Song: “Right Here Waiting” by Richard Marx
What I Thought: Oh boy. Man, I really like Heejun because he’s funny as hell and really should get into comedy once he is voted off the show. But man, I can’t stand the fact he’s only doing ballads. Not only that he’s doing ballads and sucking at them. Last week was alright. This one reminded me of a monkey drinking his own piss. I was wincing during the entire thing. Just plain awful. If he isn’t in the bottom people are keeping him around for his humor.
What the Judges Thought: Randy didn’t enjoy it at all because it was pitchy and felt like he was out of breath as well as the wrong song for him. Jennifer thought it was bad at first but at the end he got into it. Steven said it wasn’t a great song for him.
Grade: D- 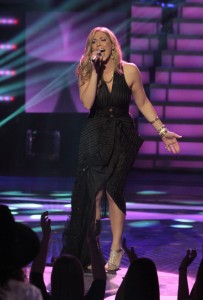 Elise Testone
Song: “Let’s Stay Together” by Al Green
What I Thought: Last week, Elise screwed the pooch. After dominating the Top-24 and really hammering home she was one to beat in the competition. She ended up in the bottom for the girls. This week, she went back to what’s she’s good at in picking an R&B song and making it into something that could be on adult contemporary radio. Al Green is the man but I think her version of his famous song did it justice even by being quite different.
What the Judges Thought: Steven loves her voice (and he seems to love every voice, regardless of how bad they suck). Jennifer said it was right on every level and made it her own. Randy said this is the reason why they loved her to begin with and called it “buttah”.
Grade: B 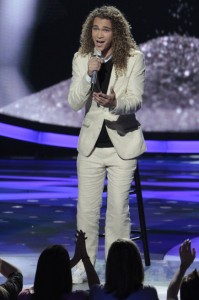 Deandre Brackensick
Song: “Endless Love” by Lionel Richie and Diana Ross
What I Thought: Yikes, that is some hair dude. Kenny G would be proud. Another ballad, another sleeper performance. Man I really need to repeat this and Heejun’s song while I sleep cause I would be in dream theater all night. I know the judges love this guy and the tweens love his hair – even if he looks like a Bantha (hey, I gotta stick with the STAR WARS theme). I don’t like him or his hair and I don’t get the appeal. I was way bored. Still, I reckon he’ll be safe this week.
What the Judges Thought: Jennifer said he could sing anything but didn’t think it was the right song for him (read, it was boring). Steven loves his voice (shockingly) and also thinks it was not the right song. Randy agreed it was the wrong song and called it boring and safe – sheesh at least Randy said what the others (and I) were thinking.
Grade: C 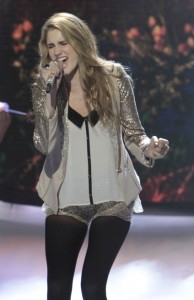 Shannon Magrane
Song: “One Sweet Day” by Mariah Carey and Boyz II Men
What I Thought: Speaking of screwing the pooch, Shannon had probably the worst performance last week but was saved because people hated Jeremy Rosado that much. Unfortunately, it is another ballad. And if the audience (and myself) wasn’t already ready for bed, they just got another dose of the best sleeping pills they don’t have to purchase. Just not the right song for her to try to make a comeback on. It was sleepy, she didn’t do a good job with it and just all over the map. Probably too big of a song for her. My guess, she’ll be back in the bottom this week.
What the Judges Thought: Jennifer thought she did a great job (maybe she was listening to a different song). Steven thought she did a really good job (yep, I guess I did hear a different song). Randy said she had mad potential and that she had something going on during that performance.
Grade: C+ 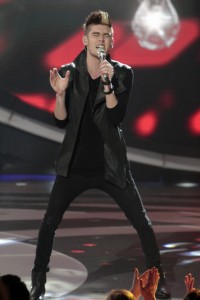 Colton Dixon
Song: “Broken Heart” by White Lion
What I Thought: Now here’s a band that doesn’t get a lot of play on IDOL in White Lion. Probably for good reason, they aren’t really someone you consider one of the major bands of the era. Luckily, Colton tried his best to bring it to a modern-ish sound. He succeed in some regard and while I think he’s definitely safe this week (after some of the performances we have already seen), it wasn’t his best work.
What the Judges Thought: Jennifer didn’t know the song but felt he connected with the song. Steven said it was the wrong song for his voice and passion. Randy thought he performed the song well and could care less about the song.
Grade: B- 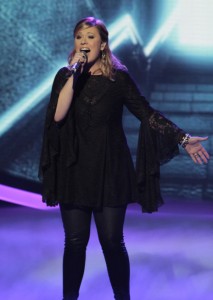 Erica Van Pelt
Song: “Heaven” by Bryan Adams
What I Thought: Great another ballad. Just what we need. I know the judges love Erica but I don’t get it. There is no doubt she can sing, but is she an AMERICAN IDOL? Not really. She just seems a bit dated in terms of how she performs and how she sings. Although I do like the dry ice effects on stage – very retro (maybe fitting given her style).
What the Judges Thought: Steven thought she was too busy on it and needed to stay with the melody (but he loves her voice). Hey, why not just have an automaton sitting there saying “I love your voice” over and over again, it would be the same thing. Jennifer thought she is growing as an artist. Randy thought it was an eight out of 10 but she needs to be careful not to make too much of it.
Grade: C 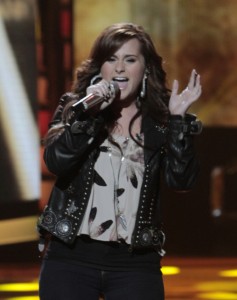 Skylar Laine
Song: “Love Sneaking Up on You” by Bonnie Raitt
What I Thought: Well butter my butt and call me a biscuit, Skylar and her chocolate banjo are back and playing it safe with a song right in her wheelhouse. Instead of going with something that Jimmy thought would work well for her and turning it into a song of her own, Cooter and Bodean (her uncles and brothers) convinced her to go with Bonnie Raitt and it ended up being something you’d see in a karaoke bar – which is rather fitting for this show.
What the Judges Thought: Automaton Steve loves her voice (I’m not kidding, he says it every time). Jennifer keeps it real and says she killed it. Randy loved it.
Grade: C 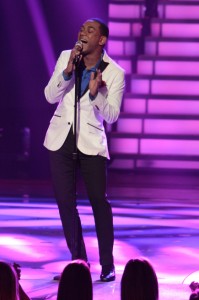 Joshua Ledet
Song: “When a Man Loves a Woman” by Percy Sledge
What I Thought: Not sure how long the son of a preacher man will be sticking around on this show if he keeps just doing the same thing over and over again. Again, it isn’t a problem with his voice. He rocks in that department. It is the performance aspect of IDOL. You gotta be contemporary and you gotta be entertaining. Without it, you are just a dude with a great voice. There were flashes he can deliver and I hope he keeps improving because he truly does have one of the best voices in the bunch, but he needs to move away from the gospel stuff and get more modern.
What the Judges Thought: Randy said this was the movement they have been waiting for. Jennifer said it was the best thing she has ever seen on IDOL. Steven said it was the most beautiful performance he has ever seen.
Grade: B 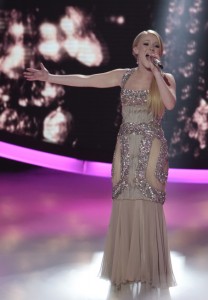 Hollie Cavanaugh
Song: “Power of Love” by Celine Dion
What I Thought: I’ve been needing Hollie to save me from this show tonight and I’ve had to wait 110 minutes to get here. Funny that she has English parents … I thought this was AMERICAN IDOL, is this even legal? While, yes, this was yet another ballad, it wasn’t boring. It didn’t make me want to throw on pajamas right away. Plus, it continues to show that Hollie is one of the definite front runners in this show if it is based on pure talent. I could definitely see a Joshua Ledet and Hollie finale.
What the Judges Thought: Jennifer said there was some minor things but says it was beautiful. Steven loves her voice (ha! It is just comical at this point). Randy said she blew it out the box.
Grade: B+

So who is in the bottom three and who goes home? My picks are Shannon Magrane, Heejun Han and Deandre Brackensick (because he originally was not voted into the Top-10 by America and was a wild card). I think Heejun goes home.

UPDATE: Shannon Magrane voted off during The Top 11 Elimination!

WonderCon 2011: SCRE4M composer Marco Beltrami on returning to the fra...
TV Review: THE VAMPIRE DIARIES - Season 3 - “Bringing Out the Dead”
Judd Hirsch takes a bite out of SHARKNADO 2: THE SECOND ONE
FRESH OFF THE BOAT: Actor Randall Park on the show's changes - exclusi...