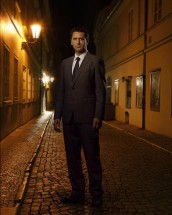 The actor talks playing a conflicted good guy all over Europe 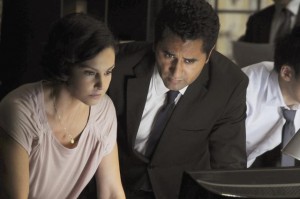 A mother in search of her kidnapped son can be formidable. A mother in that situation, who also used to be a CIA field agent, can be the proverbial unstoppable force. Certainly, that’s the case with Ashley Judd’s MISSING character Rebecca Winstone, who has raised her son Michael (Nick Eversman) alone ever since the death of Nick’s father, Rebecca’s husband and fellow CIA agent Paul Winstone (Sean Bean, see in flashbacks throughout the series).

Naturally, the CIA isn’t too thrilled with the idea of one of their own, albeit retired, deploying her Agency skills around the globe. European station chief Dax Miller, played by Cliff Curtis, is tasked with trying to keep tabs on Rebecca, which looks like it won’t be easy.

Curtis, born in the small town of Rotorua, New Zealand, has played a lot of heroic types. He was a paramedic in his last U.S. TV series TRAUMA and has also played (among others) an FBI director in LIVE FREE OR DIE HARD, an astronaut intent on saving Earth in SUNSHINE. On the villainous side, he was also Fire Lord Ozai in THE LAST AIRBENDER, Pablo Escobar in BLOW and won international acclaim for one of his early film roles in the New Zealand-made 1994 ONCE WERE WARRIORS as Uncle Bully, a man who rapes his best friend’s daughter.

MISSING begins its ten-episode first season tonight on ABC at 8 PM. Unlike most TV dramas where various countries are created by artful production design on studio back lots, MISSING actually filmed all over Europe. In a conversation about the series, Curtis says he enjoys the show’s globe-trotting production – and the opportunity to once again play a complicated but essentially good man.

ASSIGNMENT X: You’ve played a lot of people who’ve had jobs that involve crisis, whether it’s paramedic, police officer, CIA agent – are you drawn to those sorts of roles, or is that how you tend to get cast?

CLIFF CURTIS: I’ve produced comedies and I’ve got a movie [A THOUSAND WORDS, released earlier this month] with Eddie Murphy. And that’s sort of like a lighter character. I’m playing an Enlightened Being, sort of a cross between sort of Deepak Chopra and Eckhart Tolle [author of THE POWER OF NOW]. But I like these kinds of heroic characters and they deal with crisis well, so I suppose I like them. I like the idea of someone who can be in a tough situation and know what to do and figure it out.

AX: So do you feel like you sort of got playing extreme darkness out of your system with ONCE WERE WARRIORS?

CURTIS: Oh, yeah, absolutely. I’ve turned down a lot of work like that. It’s not something I need to spend a lot of energy on.

AX: How would you describe your MISSING character, CIA Agent Dax Miller?

CURTIS: He’s an idealist and he’s a perfectionist, but he’s struggling about where the line is, ideally and morally, and where his values are. Anybody gets into a career and they think, “Well, I’m doing this because I believe I’m protecting people,” and then when you’re in the CIA, he’s conflicted about that. So when is he helping somebody, trying to help [Ashley Judd’s] character find her son, and when is he not helping her? Where is that line? That’s what makes him interesting to me, is he has these kind of complex issues to deal with.

CURTIS: Not too much, but we get to see his romantic entanglements and things like that. He has a family that he’s estranged from. He’s seeing what [Rebecca] is going through and thinking how he’s estranged from his children and his ex-wife. So he has that and he’s like, “I’ve got to do the right thing here.” Because he’s lost his family through his work. They’re still alive, but … 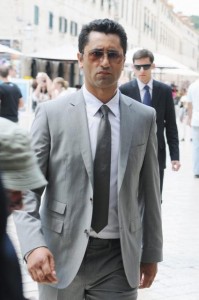 AX: What kind of stunts do you do in the role?

CURTIS: A lot of running and chasing, all the while yelling and coordinating a huge team. He’s got to organize – we’re going into a different country, so he’s got to organize Italy and whatever. So he’s still yelling all the time [laughs]. He definitely gets into action mode – not so much [at first], but he gets into it at the end.

AX: In the making of the first season of MISSING, you went to a number of different countries. Do you have a favorite among them?

CURTIS:Prague was awesome. And Istanbul – I don’t know, it’s tough. Because there were real surprises. I was expecting Prague to be nice and beautiful, but I was not expecting that from Istanbul and I did not expect it from Dubrovnik,Croatia.

AX: Where would you like to see the show go next season?

AX: Would you feel ripped off if MISSING brought you back to New Zealand next year?

CURTIS: No. That would be perfect. That’s a part of the Pacific, so that would be awesome. That would be completely unthinkable, too, [because the character] is the head of the European station of the CIA.

AX: Did you do any research for the character?

CURTIS: Most of my research was compiling what kind of profile a CIA agent has. It favors people who have academic prowess, they have to have physical ability, they have to have languages, so a lot of research into what it would take. And then there are all these different departments to the CIA, whether you’re in management or on the field, or whether you’re in Intelligence or in Technology.

AX: If you really were in the CIA, what branch would you want to work with?

CURTIS: I’d probably want to be on the field, rather than be in Management. My character basically came from the field, went into Management for his family, lost his family and so he’s sort of stuck there and now he’s sent back out in the field to chase this.

AX: Besides playing some unconventional characters, have you had any unusual jobs in real life?

CURTIS: I was in New Zealand, nineteen years old, studying acting, starving. I come from manual labor where I can move things, concrete and all that kind of stuff. So never had any fear of work. But when I pursued acting, I had to work three jobs. And one was I worked in a bakery from three in the morning until three in the afternoon. I would work dancing at nightclubs – a couple of the dance students from the dance school, we’d get dancing gigs. So that was another fun job, that was probably one of the best jobs I had. And then the worst job was I used to have to clean at a music recording studio. And if you have any idea of what happens in a music recording studio, you don’t want to see what happens and what’s left there in the morning. Every morning before I went to school, cleaning the bathroom and everything, I had to clean it up.

CURTIS: It’s been seventeen years now. It’s been a long trip. And there have been a lot of ups and downs in terms of wondering what the hell I’m doing here, why I’m here and what the purpose of being here is. So if you can correlate that to my [MISSING] character and this show, it’s like you end up being a CIA agent in Europe, running around after a woman, you’ve got to wonder, “What have I signed up for?” So there were times, I think, where it’s like, “Why am I here and what is the purpose of this – creatively, economically? Is that why I’m doing this? Spiritually, what is the purpose?” And it’s different things at different times in my life. Some decisions are based on being a [real-life] father and being a husband, and providing; other decisions are based on access to the most talented people on the planet, Martin Scorsese [on BRINGING OUT THE DEAD] and Danny Boyle [on SUNSHINE], Michael Mann [on THE INSIDER] and Al Pacino – it’s access to them. Other times, it’s been just the sheer opportunity – I mean, I come from a really small place. Never had changes there over ten, twenty years. You go over there, come back in ten years, it’s pretty much going to be the same thing happening there.

CURTIS: I just did a film [that’s recently been released] called BOY, and it’s about a small Maori boy from home and he’s obsessed with Michael Jackson and has an absent father.

AX: Are you in that?

CURTIS: No, I just produced. It’s starring a new talent called Taika Watiti. He was just in THE GREEN LANTERN, he got that role from that, and he directed and I produced another film called EAGLE VS. SHARK, I produced that, which was starring Jemaine Clement from FLIGHT OF THE CONCHORDS. That’s our little community.

AX: Anything else you’d like to say about MISSING?

CURTIS: I can’t wait to see it. I’ve only seen the first two, so I want to see how it all unfolds. I think that that this thing, if you like spy novels, it’s like a good read. It read really well. When I read the scripts and I read the episodes and I read episode to episode, it read like a great spy novel.