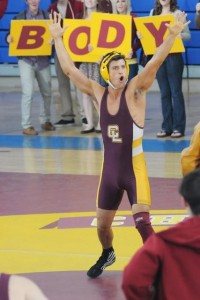 ABC’s freshman comedy SUBURGATORY, which runs Wednesdays at 8:30 PM, has already been renewed for a second season. The show, created by Emily Kapnek, is genuinely funny and features a great cast, headed up by Jane Levy as teenage protagonist Tessa Altman. Tessa’s well-meaning dad George (Jeremy Sisto) has moved the family from Manhattan to the suburbs, where Tessa’s high school is full of suburban mean mall girls.

Many of the girls are interested in hunky male classmate Ryan Shay, played by Parker Young. The 23-year-old actor has an extensive resume in television and film, but SUBURGATORY is his first regular TV gig. Standing on SUBURGATORY’s high school classroom set, Young talks about playing younger than he is – and goofier than most people are.

PARKER YOUNG: Sort of, yes. I’m having so much fun with this character. Originally, Ryan Shay wasn’t written quite so dumb and he really morphed into this total knucklehead, total idiot, and it’s so much fun to play, super-enjoyable. And really what I do is, I just imagine that I’m a kid, I just say what’s on my mind. You can tell what Ryan Shay feels, he’s very impulsive and he’ll dance if he feels like it, take his clothes off if he feels like it, just a total child. And he really likes women, likes Tessa. That’s sort of my evolution thus far.

AX: If Ryan spends enough time around Tessa, who is very bright, is there hope that he may learn something?

YOUNG: You know, in [several] episodes, George takes Ryan under his wing and teaches him to be a man, trying to find who I am on the inside, and I take that information and use it to my advantage to try to work my way back into Tessa’s life, and I think I’m rather successful.

AX: How is it working on a half-hour comedy? Did you think you were going to be on it for this long and that the show has been picked up for a second year?

YOUNG: Working on a half-hour has been so much fun. Just all around, it’s been the most amazing experience. The cast is great, the writers are great, it’s a fun, quick-paced show. I’m not surprised by how well it’s done, just because of the chemistry everybody has together, and I wouldn’t be surprised if it goes much, much longer. 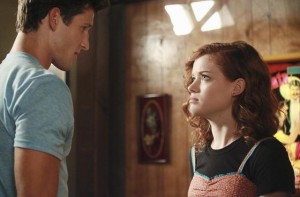 AX: Do you talk to series creator Emily Kapnek at all about what you’d like to see in Ryan, and/or what she wants from the character?

YOUNG: I’ll talk to her about her thoughts. Honestly, at this point, I feel so blessed to be a part of it that I just take what they want to give me and run with it and do the best I can. I don’t want to impose too much of myself on their creativity. When we’re on set with the director, with the writer who’s on set, before the shoot, I like to do what she wants and I go with it.

AX: Before you started on SUBURGATORY, were you familiar with the work of any of the other people in the cast?

YOUNG: Oh, yeah. It was freaky to find out who I was going to be acting alongside. It really solidified the fact that this was going to be a good show. I admire all of them very much. And this guy right here [indicates colleague Rex Lee, who is sitting nearby], he’s more wonderful than anybody.

AX: Is it difficult to play somebody who’s still in high school?

YOUNG: It’s not. The majority of my life, I remember being in high school. Those were my fondest years. So I just tap back into when I played football in high school and what it was like to be surrounded by those people and it’s so much fun, it was easy to just jump back into it.

AX: Did you want to act when you were in high school in real life, or did acting come after football?

YOUNG: In high school, I was captain of the football team, but I also did theatre. My junior year, I got into theatre kind of heavily and then I got a few too many concussions playing football and decided to give up football and focus on acting and I moved out here [to Los Angeles] with that intention.

AX: Where are you from?

AX: L.A. is probably a better place to have a career as a professional actor.