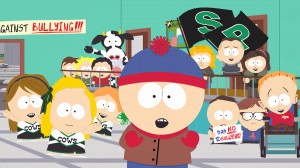 Bouncing back from last week’s uneven “Jewpacabra,” SOUTH PARK kicks butt with “Butterballs”, a hilarious take on school bullying and the media’s exploitation of it.

Some of this is directly tied to the documentary BULLY which just hit theaters and focuses on actual bullying happening in our public schools. One of the most obvious things creators Trey Parker and Matt Stone bring up with this episode is that by making a film about bullying and then putting the bullied kid as the face of the movie on the posters, opens him up to even more bullying.

Didn’t think of it that way – leave it to Parker and Stone to point out the super obvious.

The crux of the story focuses on Butters finding himself the brunt of bullying, he’s told to fight back or at least tell someone about it. So he goes to his grandma, who we find out is the one bullying him. This hilarious turn of events provides some of the most hilarious laughs in this episode – including Butters putting on his Captain Chaos outfit to fight back only to find his grandma in her own creepy super villain outfit (looking a bit like a cross-dressing S&M Magneto).

Meanwhile, the school is upset that bullying is going on and enlists Bucky Bailey’s Bully Busting to help give the students a chance to stand up and make a video about bullying. Stan is in charge, and it turns into one long tracking shot musical number with Butters in the center. When a big movie studio wants to release it, more bullying occurs until the end result includes Jesus bullying the studio exec not to release it, while Stan ends up in San Diego jacking off (don’t ask).

Strange, and surreal with Monty Python non-sequitur flourishes throughout, “Butterballs” has many highlights including the grandma/Butters battles. I love how she pokes him under the dinner table with a fork (unknown to his parents what’s actually going on) and I love the surreal, deranged speech Butters gives his grandma at the end about how her life is almost over and he’ll visit her in a hospital as she’s dying knowing that she’s almost dead.

It’s brilliant and funny and wrong, but the best SOUTH PARK’s always are.

The other recurring theme is how everyone seems to bully someone else in an attempt to stop bullying. The theme song also includes the hilarious line “Make Bullying Kill Itself.”

The episode, not really knowing how to end, sends Stan to San Diego where he gets naked and masturbates in the streets to a very funny and catchy song. While this gag was set up throughout by Kyle, and I’m unaware of what they’re trying to parody, just for sheer silliness and very funny animation, it gets tons of points.

Perhaps the only negative, is that I would have liked to have seen more grandma bullying, but that’s a minor quibble.

It’s so strange how a SOUTH PARK season can be so polarizing to fans. Episodes I’ve liked, others have hated while an episode like “Jewpacabra” that I didn’t like, people loved. It’s the nature of SOUTH PARK, and probably what has kept it on the air for so long. It has so many flavors, and such flashes of brilliance, you can’t get enough of it whether it’s a good or a bad week.

EDITOR’S NOTE UPDATE: Thank you to all the readers  for pointing out the San Diego reference being a Kony video. I sensed they were parodying something I wasn’t aware of (and yes, when it comes to people doing crazy, obscene things in public, I do tend to live under a rock and avoid them).  As always, the beauty of SOUTH PARK is making fun of things people are aware of and not aware of, but making it enjoyable for all regardless of if you’re fully aware of the targets or not.