Each episode this season has gotten progressively weirder and weirder – is it good? I have no idea, but it certainly entertained me 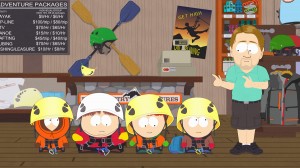 SOUTH PARK has been so weird and crazy during Season 16, it’s hard what to make of it week to week. Sometimes it’s really funny, other times it’s been getting really weird. And this week, it goes off-the-rails weird – so much so that even though it wasn’t that funny, it still was more interesting than just about anything else on TV this week.

“I Should Have Never Gone Ziplining” is set up like one of those reality shows about horrible things happening to good people. It’s done in almost faux documentary style and features Stan, Kyle, Cartman and Kenny deciding to go zip-lining because it sounds fun.

However, it turns out to be their worst nightmare. No, they don’t end up stranded and eating each other for survival. Nothing nightmarish mauls them. No, it’s just plain boring. And the people that are part of the “zip lining tour” are boring.

The boys get so bored, they end up taking a horse ride back down the mountain that ends up even more boring and then on a boat that goes super slow.

This is where the episode gets inspired though – scenes are re-enacted from their boat ride and it’s done in live action. If anyone wondered what a live action SOUTH PARK movie or TV show featuring Stan, Kyle, Cartman and Kenny might look like – this is it. It’s quite ridiculous, but it ultimately is quite satisfying in how over-the-top it ends up.

It even concludes with a “you killed Kenny moment.” But it’s Kenny, dying of boredom.

“I Should Have Never Gone Ziplining” is another experimental episode for creators Trey Parker and Matt Stone. It works half of the time and excels with the live action elements at the end – and of course Mr. Hankey saving the day.

Hopefully this episode will put the death knell on Paramount Pictures ever trying to do SOUTH PARK as a live action feature. The show works perfectly in animation, and even though the live action bits are cool, it’s clear Parker and Stone want people to remember why they animate their series and why it’s the only way it should be made.

One more episode until the fall – can’t wait to see what they come up with next week for the midseason finale.