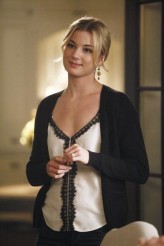 After a brief hiatus, REVENGE is back not quite with a vengeance, but with a “Doubt,” technically the reasonable doubt Daniel Grayson (Josh Bowman) needs to get off for Tyler’s murder, but also with doubts about how the producers are going to pull off multiple seasons of this show. It does seem that at some point, Emily (Emily Vancamp) is going to have to leave off torturing the Graysons for the way they set up her father for a plane crash he wasn’t responsible for – and they were – if only because there’s only so much she can do without things getting ridiculous or her getting found out.

But that’s for another day. At the moment, the Grayson machine is in full spin cycle. Victoria (Madeleine Stowe) can’t get her daughter Charlotte (Christa B. Allen) to be any more specific about the person in the hoodie that she and Declan (Connor Paolo) saw on the beach that fateful night. But everyone knows Declan’s older brother Jack (Nick Wechsler) had a thing for Amanda Clarke and he wasn’t in Haiti, like he was supposed to be, so it’s funny how the sketch suddenly turns out to look like Jack.

Victoria is determined to pin the murder on Amanda (who, as we know isn’t Amanda, but Emily Thorne – the two switched names when Emily went into the revenge biz). After all, Amanda has the best motive and a history of being unstable. So Emily, who knows that Amanda is being kept by Emily’s mentor Takeda, decides to manipulate Jack into going to Canada to try and find Amanda.

Emily’s not done there. She gently suggests to Victoria that if Victoria wants to pin the murder on Amanda, who better to lead the charge than failed author Mason Treadwell (Roger Bart)? So Emily sends Nolan (Gabriel Mann) to chase Treadwell down. In the meantime, Victoria is determined to get Daniel out of the prison where he’s being held pending his trial. Unfortunately, that means Daniel gets his backside seriously beaten down. The good news is that the judge now has to let him wait for trial under house arrest and $10 million in bond money.

Emily, however, follows Victoria to a bar and sees her make the pay-off. What Emily doesn’t see is a man send Victoria a drink – well, Vicki Harper, as in Victoria’s old name. Sure enough, it’s an old flame – an artist who can’t finish any paintings since Victoria left him.

Treadwell, for his part not only confronts Jack with the sketch, he talks to Declan, who tells Treadwell that Charlotte was higher than a kite that night and they really saw nothing. Treadwell confronts Charlotte, but oddly, he seems more worried that she’s hooked on pills rather than that she lied about the person in the hoodie. Charlotte doesn’t care and lets Declan have it for exposing her.

After Emily instant messages Treadwell, leads him to believe that Victoria was behind the fire that destroyed his precious interview tapes, so now Treadwell has even less incentive to support Victoria and leaks it that Charlotte didn’t see anything, which undermines the case for Daniel even further. When Treadwell threatens to expose Victoria, she goes looking for another suspect and tries to convince Daniel that maybe Emily would make a good target. Needless to say, Daniel is less than enthusiastic.

Emily is not available at the moment. She’s wearing a brown wig and visiting with the guy Victoria paid off. She gets all the information she can out of the guy, then takes him outside, kicks the pee out of him, then makes an impression of his car keys.

For so much going on, the episode still feels a little flat and a waste of Courtney B. Vance’s talents. Vance plays Daniel’s lawyer Brooks and really doesn’t have much to do here. It all feels like more set up than actual action and it’s really hard to see if this is going, let alone where, especially with Victoria’s affair with her old flame. Such is the nature of this show – one week set up, the next week it all goes crazy.