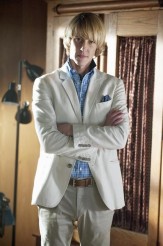 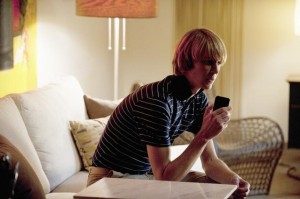 Gabriel Mann stars as Nolan Ross on the hit ABC show REVENGE, a multi-rich young guy living in a fabulous house in the Hampton’s and helping Emily Thorne (Emily VanCamp) get revenge for her father (James Tupper) being framed by the Grayson’s. He is a computer genius, and has many facets to his on screen personality.

ASSIGNMENT X caught up with Gabriel recently to talk about his character and about Season 1.

ASSIGNMENT X: You are such complex character, what type of response are you getting from audiences here?

GABRIEL MANN: What’s so interesting about it is that I really had no idea what people’s perception of this guy was going to be before we had started. I was really having some moments where I thought people may very well despise this guy in a way that he’s almost like the Jar Jar Binks of REVENGE! [Laughs] So I thought this will go well or this could go horrible wrong, but I was pretty determined to sort of bring the idea of this guy to life and give it a shot. I really have to thank [creator] Mike Kelley and [“Pilot” director] Phillip Noyce for having the faith to let me sort of play with this a little bit. So, okay, it’s not going to be necessarily clear in the first couple of episodes, but as we evolve I think there’s a lot of complexity and ambiguity to play with and as people started to catch on and enjoy it I think they started playing to those qualities even more, obviously.

AX: When I ran into you awhile ago, I asked you when Tyler was going to get his and you said soon and that episode where you got stabbed by him.

MANN: [Laughs] Once you start inflicting bodily harm something bad is going to happen. Nolan is not a guy who sits idly by and let’s things happen per say. Maybe he has secret ninja skills like Emily too. It was really funny, I’m like ‘oh really Tyler you’re cutting me! Something terrible is going to happen to you now, that’s a really bad idea.’ On REVENGE anything is possible. I don’t know if that’s the end of anything. Nothing is the necessarily the end of anything on this show.

AX: They just took him away?

MANN: Yeah, we just saw him in a car, but we didn’t really see what happened.

AX: Are you going to get another love interest?

MANN: He better! He’s so equal opportunity and there’s a wealth of opportunities there. And I’m game for anything the writers want to bring at this point.

AX: Do you think he really loves Amanda?

MANN: Absolutely. I think that there is a very complicated love relationship there. It may be unrequited on her part. She continues to tolerate me and the relationship continues to develop and evolve. I don’t think I would hang in through all the danger and drama if there weren’t some real heart connection to her. As to the nature of what that connection is, I think that is what they are in the process of what they are continuing to develop. 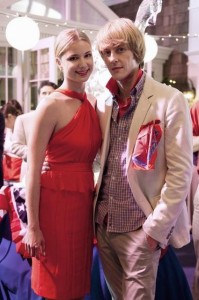 AX: The scenes between you and Tyler Barrol [Ashton Holmes] was off the charts.

MANN: It was great. Because I think neither of us knew that was where the story was going to go. He’s just a tremendous actor. So I think when you put two snakes in a pit something is going to happen. It was just so much fun playing the scenes with him because he is really good — he sort of took a game of checkers and turned it into chess all of a sudden. The delicacies and complexities of where that was going became really fun. And I’m glad people enjoyed watching it.

AX: Is Ashton a good kisser?

MANN: He’s absolutely game for whatever. And I think that if anyone attempts something with enough enthusiasm something interesting and potentially good is going to come out of it. He’s not a bad kisser! [Laughs]

AX: In real life how are your computer skills?

MANN: I’m much more tech savvy now, not necessarily because of Nolan, but just because this has been so much fun following the organic progress as the series goes along. So I’ve sort of self-educated as we’ve gone along. I mean, there’s nothing really I want to hack into and there’s no information I need that much. You can probably find most of the information that we are interested in anyway.

AX: What is it like working with Phillip Noyce?

MANN: Phillip is amazing. He’s obviously a visionary director. He’s done some really tremendous work. I think he really set the stage for this show, because it is melodrama. It could be sort of thought of as Soap to a certain degree, but he wanted to create a really cinematic quality to it. Set a template from where we would go from there after. And I’m really grateful for him doing that as he sort of takes it out of the realm of one shot, one shot and starts playing with the camera and moving it and telling the story in a really dynamic way. So I am internally grateful to Phillip for him having the faith initially in what I brought to the table with this character. To kind of let me continue playing with it in that way.

AX: What did you bring to it that he didn’t have there?

MANN: There just wasn’t much on the pages on how he should be played or how he would be represented, but I thought with the concept of the show everyone’s got to feel like they could go in any number of directions, so as much darkness and sensitivity at the same time that I could bring I wanted to keep it open. Since they never tell us where we are going, I thought let me keep it open to interpretation so it’s not beyond the realm if I would go kind of off-the-clip evil or if it turns out I have a heart as big as Texas. So I think we found a middle ground in-between.

AX: What is your real feeling on revenge?

MANN: It’s an awful idea. I don’t think it ever turns out well in the end. It you sit back for long enough karma comes and grabs you anyway. And if you start pushing it along it’s got a way of sort of flipping back and biting back at you. 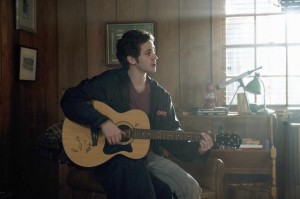 At this point Gabriel spies Connor Paolo and yells to him to come over and join him. Connor portrays Declan Porter on the show. He helps tend the bar with his brother Jack Porter (Nick Wechsler) and he is in love with Charlotte Grayson (Christa B. Allen).

AX: Talk about your character and what you like and dislike about it?

PAOLO: He’s the only honest person on the show.

AX: You are, but sometimes you come across very unsure of yourself?

PAOLO: I don’t really think that. I just think that he is very unhappy. He’s distasteful with the situation and he doesn’t want to be who he is. He only has one thing in his life that he loves, that’s this girl [Charlotte].

AX: Do you think that you live in the shadow of Nick’s [Wechsler] character?

PAOLO: I think he lives more in his father’s shadow then Jack’s, because Jack has kind of accepted the mantle that his father gave him, but not by choice. He is there because his dad died as he was planning on leaving. He was planning on leaving the next day and his dad died. So Jack is not there in that bar by choice, only by necessity. So I think Declan understands that and respects it, but it doesn’t mean that he has to be there.

AX: Gabriel, and then you bought the boat so they couldn’t leave.

MANN: Yes I bought the boat and very gladly gave it back! [Laughs]