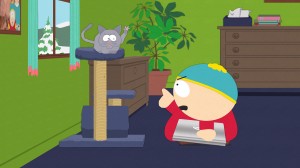 Yes, it’s too early in the Season 16 run of SOUTH PARK, but I have to admit, it’s going to be hard for creators Trey Parker and Matt Stone to top the episode “Faith Hilling.”

I’ll go on record as saying this could very well be the best episode of the new season, or at least may end the funniest.

It’s jam packed with tons of satirical targets, but deals primarily with how fast memes spread in society since the advent of the Internet.

No longer does a social meme like a peace sign or bunny ears stand the test of time. Nope. Today’s memes have a shelf life of a month or two tops.

The episode starts off with discussing the act of “Tebowing” which has proven to lead to untimely train deaths (these gags are hilarious in their own ridiculous way).

Soon we learn about “Faith Hilling” which is the act of pulling your shirt out as if you have “boobies” and then taking a picture of it. When the South Park boys decide to crash the Republican hopeful debate with “Faith Hilling”, they find out that it’s now passé and replaced by the act of “Taylor Swifting” which is to put your arms through legs and dragging your butt on the ground.

The episode doesn’t stop there which builds to a hilarious apex with “Old Long Johnsoning” which is inspired by a viral cat video where a cat sounds like it’s saying “Old Long Johnsoning.” Apparently cats are evolving just like people, and are getting into the meme craze by posting pictures of themselves with bread on their heads – this is dubbed “Cat Breading.”

The episode never lets up as one ridiculous thing trumps another. Toss in a great RAIDERS OF THE LOST ARK homage, a Cartman song at the Republican debates and Butters with a gun in his mouth for the duration of the episode and you have all the makings of classic SOUTH PARK.

When an episode is jam packed like this, it really makes you appreciate what Parker and Stone do and in such a short amount of time. There are many laugh out loud moments throughout “Faith Hilling” and it once again showcases what sharp, on target and hilarious satire SOUTH PARK can provide when it has a target as fresh and easy as memes.

After “Faith Hilling” you’ll never look at Cat Breading Taylor Swift Reporting” again. Now excuse me while I engage in some “Pandering.”