The actor also talks his new series, fatherhood and more 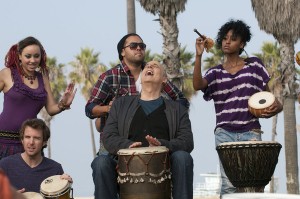 In NBC’s new half-hour comedy series BENT, airing in a limited run Wednesdays with back-to-back episodes at 9 and 9:30 PM, Amanda Peet plays straight-arrow, hardworking divorced mom Alex Meyers, who hires David Walton’s carefree contractor Pete Riggins to fix her kitchen.Sparks fly, and not just from the equipment. Pete has some eccentric coworkers, but the most outstandingly peculiar person in his life is his father, James Riggins. Played by Jeffrey Tambor, James still aspires to an acting career, even though he’s on the far side of fifty and his showbiz success currently consists of playing piano at a department store.

In terms of acting achievement, the San Francisco-born Tambor is pretty much the opposite of his BENT character. The performer has created a number of iconic figures, including Murray on the U.S. version of MAX HEADROOM, the insecure Hank Kingsley on the 1992-1998 run of THE LARRY SANDERS SHOW, George Bluth Sr. and Oscar Bluth in the much-adored 2003-2006 ARRESTED DEVELOPMENT (now headed for the big screen) and Tom Manning in the HELLBOY movies.

Tambor sounds very upbeat about his work and fatherhood both onscreen and off in this talk about BENT.

ASSIGNMENT X: What drew you to BENT? 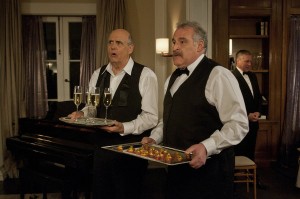 AX: Are you concerned that, initially at least, it’s a limited run?

TAMBOR: It’s six so far. [Network limited runs] used to be thirteen, it used to be twenty – it’s a different [time] – you know everything you have to know. I think [the network has given] huge support, they’re very excited about it. Me? I like coming in the back door. Shall I rephrase that? I like coming in just quietly and doing your best shot. You go like that. I knew on [the 1986 series] MR. SUNSHINE that we were going to be a limited run, but boy oh boy, it was crazy. LARRY SANDERS I was positive. ARRESTED DEVELOPMENT, I knew. This has that feel to it. It just feels funny when you’re on the floor and you see Amanda [Peet] and David [Walton] just kick off, and then we had Marcia Gay Harden come on, and Larry Miller, and these guys turn to me and say, “This feels really good.” And that’s where you go. My first job was I was fifty-five dollars a week at a repertory company inMichigan, so give me a break. This is a good problem.

AX: How do you feel about the aspect of doing a show that requires promoting it?

AX: Did you have to learn anything for this role, like how to fake playing the piano?

TAMBOR: I had to do that a little bit, but not too much.

AX: You’re soon going to be returning to ARRESTED DEVELOPMENT after a number of years. Are all of your fellow regulars coming back?

AX: Are you excited about returning to the Bluth family?

AX: All of your characters with mottos are a little bit offbeat …

TAMBOR: I do like that. This is going to sound odd and I hope I put it the right way. In Shakespeare’s troupe, there was a character called the Eccentric. And I like that, I like the degree of difficulty in the dive. And maybe that’s not a good thing, but I like it.

TAMBOR: A thing has happened with THE LARRY SANDERS SHOW, because it’s on IFC, it’s got a current audience. So it’s just interesting being me right now [laughs]. I have an older audience that’s seen it, I have a younger audience that’s seeing it for the first time, and then I just weeks ago did YO GABBA GABBA. So come on [laughs]. And that’s all I’ve ever wanted to do – I’m a character actor.

AX: When pilot season comes around, if you’re not already attached to a show, how do you decide what you want to do next?

TAMBOR: I have four kids. Daddy has to be on the air [laughs]. I just had twin boys, two years old, I have a five-year-old and a seven-year-old and a thirty-something-year-old who’s a professor of history inNew York. So Daddy has to work. Everybody thinks we [as actors] sit by the pool and peel grapes. I have a pool. I’ve been really lucky. I’ve just been really, really fortunate. I knock wood every day, but I always try to follow the role and I try to follow where my heart is. Sometimes you bump into a wall and sometimes you go on.

AX: A lot of actors talk about career insecurities. Do you still have those?

TAMBOR: I’ve changed. I kind of have insecurity that my son will have his piano lesson done before the next lesson at three-thirty. Yes. Everybody has that. Everybody has, “Is this the last job?” and things like that, but it gets better, as you get older. It doesn’t get worse, it gets better. Maybe because you’re tired.

AX: Has being a parent informed your acting at all?

TAMBOR: The truth? You ready? I feel like a better actor. I do. I have easier access to my emotions, I cut out the worrying part of it now because I don’t have time, [the children] make me more grounded and more human. They’re my teachers. I exercise – they’re my exercise. I’m grateful for them. By five o’clock, you kind of want to slap me around a little bit, but I’m grateful for them. That’s the real truth. My wife said it perfectly, my wife Kasia, she said perfectly, “It’s not everyone’s life, it’s our life.” And I’ve worked nonstop since they were born, so they were good luck as well.

TAMBOR: God, I wish so. They’d better hurry, because I’ll be in a walker. No, it was so much fun, so much fun. That is one of the great directors on this planet, Guillermo Del Toro, and one of the biggest hearts. He taught me so much. I’ll work with him anywhere

AX: Do you know a lot of guys like your character, James Riggins?

TAMBOR: I do. I can relate to this. I know guys my age who haven’t worked in ten years.

AX: Do they still love it, though?

TAMBOR: Sure. Absolutely. [The alternative is], “What, and give up show business?”