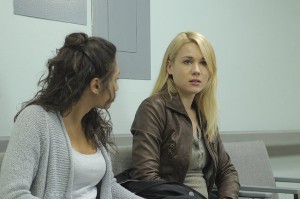 The title of BEING HUMAN’s new episode “Don’t Fear the Scott” is a play on “Don’t Fear the Reaper,” because Scott is what Sally’s (Meaghan Rath) Reaper (Dusan Dukic) – or possible figment of her imagination, the jury’s still out on that one – calls himself. Actually, Reaper Scott does nothing in this episode except occasionally and ineffectively badger Sally, so there’s no reason to fear him. On the other hand, when Aidan (Sam Witwer) gets a bad break and Josh (Sam Huntington) gets a potentially good one, they both promptly do such dumb things that we half-hope Scott will go haunt them, if only to get them off their respective bad paths.

Josh, wanting to deepen his relationship with former fiancée/current girlfriend Julia (Natalie Brown), invites her over to the house for supper. He reckons this should resolve Julia’s lingering unease about having slept with Aidan months earlier. Aidan proposes it be a double date with his lover Suren (Dichen Lachman). Despite Julia not realizing that Aidan and Suren are both vampires (not to mention that Josh is a werewolf) and Suren startling everyone by saying cheerfully that she knows Julia and Aidan had a fling, it all goes surprisingly well.

Then vampire queen Mother (Deena Aziz) returns to town. She gives Suren control of the vampire community in Boston. Mother had promised to free Aidan, but her definition of freedom is banishment from the vampire community, including Suren, with death to anyone who breaches the decree. Aidan tries to attack Mother, but is simply sent away rather than killed.

Josh’s werewolf girlfriend Nora (Kristen Hager) returns, just as Josh is kissing Julia. Josh tells Nora it’s too late for reconciliation. Nora is able to help Sally, who is hanging around the hospital. Janet (Amber Goldfarb), the woman Sally possessed a few times in order to have sex with Janet’s boyfriend, is locked in the psych ward, as she’s suffered a breakdown due to inexplicably having Sally’s memories. With Nora there to speak for Sally, the werewolf and the ghost finally get Janet to believe the truth – that she was possessed. Janet is then able to get a clean bill of mental health and go home.

Aidan’s progeny Henry (Kyle Schmid), already showing signs of ambition, is at first appalled by Aidan’s banishment, thinking that it applies to him as well. Aidan assures Henry that it doesn’t, and asks Henry for a favor. Henry sets up a meeting for Aidan and Suren. Aidan asks Suren to run away with him and she agrees.

Aidan goes to the house to say goodbye to Josh and Sally, both of whom are devastated by his departure. Then Nora comes to see Josh. She has learned that her werewolf friend Brynn is more violent than Nora can accept. However, Brynn told Nora that the werewolf curse can be broken if the werewolf, in human form, kills the werewolf who turned him/her, also while in human form. Josh feels that this wouldn’t help anything – he’d still be a murderer. Nora says she knew he’d say that. Josh wants to know why Nora doesn’t kill him. She tells him she can’t – she loves him. And Josh goes back to Julia and kisses her deeply.

Suren isn’t thrilled by the dumpy motel Aidan has found for them. Worse, she’s really hungry. Aidan says he’ll go out and get food, but he’s met in the motel parking lot by Henry and two other vamps who have been sent to kill him.

At this point, flashbacks to Henry as a sweet, caring human doctor or no, it is impossible to understand why Aidan would trust his progeny to make a prank phone call properly, much less with his life. Between Henry’s history of routinely screwing Aidan over at every turn and his clear insensitivity to Aidan’s wishes, Aidan’s decision to trust Henry seems less like love-struck desperation to be with Suren than improbable blindness, a death wish or both.

Then there’s Josh. Even Josh acknowledges that he and Nora have a real bond. So Josh is going to let a bit of depressed ranting by Aidan sway him? Furthermore, Nora knows Josh very well at this point. Everything Julia believes about him (including how he is in bed these days, courtesy of Josh being possessed by Stu during sex) is wrong. So Josh of course goes back to Julia, which seems less out of love for her than out of anger that Nora didn’t come home sooner. We’ve seen him make this kind of mistake before. At this juncture, it’s not dramatic, just annoying.

Finally, seeing Sally and Nora get through to the skeptical Janet is fun, but it’s not clear in this episode what function Scott serves. He’s no longer able to force Sally to shred people, so he just sits around baiting her. If Scott is really just a detached part of Sally’s personality, surely she’s able to contemplate being unhelpful on her own, and if he really is something else, then right now, we’re treading water where he’s concerned.

The dinner scene at the house is a lot of fun and the goodbyes between Aidan, Josh and Sally are affecting, even though we have reason to suspect they’ll all be back together sooner than they think. But let’s hope Aidan and Josh return to rationality in the near future, preferably by the next episode.