TV Review: BEING HUMAN – Season 2 – “Partial Eclipse of the Heart”

A fair amount of suspense and some interesting story detours 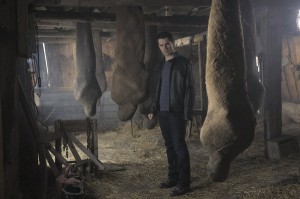 Setting aside that BEING HUMAN has managed to almost totally separate its leads once again (and when the show does that, we might as well be watching an anthology), the episode “Partial Eclipse of the Heart” gets to expected results in two stories by taking unexpected routes, and handles a third in a way we don’t see coming but that works very well. The episode has a fair amount of suspense, not in a horror movie way, but in a how-will-they-get-out-of-this fashion.

Foremost among these is Aidan (Sam Witwer), who when last week’s episode was surrounded by three fellow vampires, including his progeny Henry (Kyle Schmid), out for his blood. Surprise: Henry is on Aidan’s side and helps him kill the other two vamps. Henry is willing to follow Aidan, but only if Aidan leaves behind his lover, runaway vampire princess Suren (Dichen Lachman). Aidan isn’t willing to give up Suren, so Henry (sporting a wound that will make it credible that he tried to kill Aidan) heads back to vampire queen Mother (Deena Aziz).

Suren is very hungry and afraid that she is endangering Aidan by staying with him. Aidan promises her that nothing will happen to him – he’ll fix everything and then she can feed. Aidan goes toPennsylvaniato see Atlee (Kyle Gatehouse), the Dutch vampire Aidan allowed to take credit for killing purebred werewolf Connor. Aidan wants the Dutch to shelter him and Suren. Atlee insists that Aidan provide fresh food for the Elders when they awake at sundown. When Aidan goes back to the motel to collect Suren, she is gone. Suren returns to Mother, who is pleased by her progeny’s return.

Ghost Sally (Meaghan Rath) is trying to break through to live psychic Zoe (Susanna Fournier). Zoe can hear and see Sally, but refuses to speak to her, as Sally (while in the throes of ghostly mental illness) shredded and “killed” Zoe’s ghostly boyfriend Nick (Pat Kiely). However, when an eclipse of the sun causes another of Sally’s shredding victims to reappear, Sally realizes Nick will likely show up back at the house. Sally arrives before Zoe.

Nick is there. He tells Sally he is stuck in limbo, conscious but trapped in nothingness. However, when Zoe arrives, Nick lies to her and tells his living lover that he’s at peace and in a good place. Meanwhile, Sally sees her old fiancé Danny (Gianpaolo Venuta), the man who murdered her and whose ghost she shredded. Danny says that limbo is so awful that he half-thought Sally meant to send him there. He knows he deserves it. When the eclipse ends, Nick and Danny vanish, but Zoe forgives Sally, believing the ghost sent Nick on to a better place. Sally guiltily keeps her mouth shut.

Josh (Sam Huntington) has gotten serious again with former fiancée Julia (Natalie Brown), who he abandoned when he first became a werewolf. Having learned from fellow werewolf Nora that he can break the curse by killing the werewolf who killed him while that wolf is in human form, Josh goes to see Ray (Andreas Apergis). Josh is startled to see that Ray has a wife and son. Ray is happy to see Josh and advises Josh to tell Julia the truth.

Julia’s best friend Chelsea is in town and Julia, with Josh’s consent, sets up a meeting for the three of them.Chelsea warns Josh he’d better not break Julia’s heart again. After Chelsea leaves, Josh steels himself to tell Julia the truth about his werewolf condition, but before he can speak, the solar eclipse begins and Josh starts to turn. He runs out of the restaurant with Julia in pursuit. Julia finally corners Josh in an alley – he faces her, partially turned, with fangs and claws. Julia backs into the street and is hit by a car. When Josh returns to normal, he finds Julia sitting on a step. She asks what he is and he explains.

She seems very calm about it and asks why he didn’t tell her before – she loved him, she could have handled it, but it’s too late now. Josh sees Julia’s body being taken away by paramedics and realizes Julia is a ghost. Julia says she loved him enough to accept anything, and it’s a shame he couldn’t believe it. Her door appears, with white light behind it, and Josh lets her go through it.

Sally’s story here is in a way the most straightforward and novel. There is something mythically resonant about having ghosts come out during an eclipse. It also makes sense that, in a universe where there is definitely an afterlife, ghosts can’t inflict total oblivion on one another by accident. It’s unclear what’s happened to the reaper Scott – did Sally just get over him and cause him to vanish from her psyche? – but we don’t miss him. Fournier’s truculent energy makes Zoe a fun character and we don’t blame Sally for trying to repair their friendship. It remains to be seen whether limbo will crop up again in the tale, but the set-up is intriguing.

Poor Aidan. Okay, he could trust Henry this time, but he’s once again managed to paint himself into a bloody corner. Having Aidan trying to blackmail Atlee is a logical carry-over from their previous encounter, but it feels like a few too many story and character beats are crammed together here. Aidan wanted his freedom from vampire society so that he wouldn’t have to keep killing humans, but he’s running with Suren, who shares none of his scruples. Then he goes to the Dutch, who want him to procure human victims.

We don’t see what Aidan does about this, but since he is prepared to collect Suren and take her to Pennsylvania, we can infer he obliged the wishes of the Dutch vampires. So … he’s getting humans killed so that he can be with Suren, who will also want to kill humans, and he’s in this mess because he wanted his freedom from vampire society – because vampire society expected him to kill humans. Granted, real people aren’t entirely consistent, but this paradox seems like it warrants more examination than it receives here. We at least want to know if Aidan is aware of the irony, or if he’s just hurtling forward in the direction he’s being pushed by each new event.

As for Josh, it felt absolutely inevitable that he wouldn’t wind up with Julia; it was just a question of how the breakup would occur. As Josh was poised to do the right thing, it seems a little unfair that being secretive once again ruined – in this case ended – his lover’s life. However, it would seem like his experience with Nora should have had him wearing an “I’m a werewolf” sandwich board to warn prospective lovers, friends and acquaintances as to why he needs his privacy now and then. The end sequence also felt a little forced – maybe Josh can’t immediately tell Julia is a ghost, but the audience can, since we know she’s been hit by a car and wouldn’t be left by police and paramedics to sit alone on a concrete step. What seems intended as the startling revelation that Julia is dead is undercut by the fact that we already know this. It’s a bit of a shame, as Brown has a good warm presence and achieved some nice couples chemistry with Huntington.

We’re curious to see where all of this is going. With the season finale next week, we may get some answers to our remaining questions and there may yet be more welcome surprises.