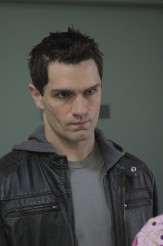 A very strong episode, where all the characters’ issues impact each other 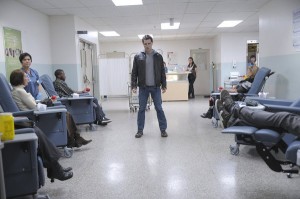 Picking up right where last week’s BEING HUMAN episode “When I Think About You, I Shred Myself” left off, “Dream Reaper” finds the ghost Sally (Meaghan Rath) comatose and upside-down on the stairs, surrounded by a protective circle of salt. As vampire Aidan (Sam Witwer) and werewolf Josh (Sam Huntington) rose themselves from their debilitating, albeit understandable, funks to try to help their imperiled roommate, the show fully hits its stride, giving us a plot that could happen nowhere else on genre TV.

As neither Aidan nor Josh know much about ghost lore, they reckon it’s a good idea to fetch Sally’s human ghost whisperer erstwhile friend Zoe (Susanna Fournier) from the hospital. Both men feel it would be better not to mention that Sally just shredded Nick (Pat Kiely), Zoe’s ghost boyfriend. Zoe is furious with Sally for killing all the members of Zoe’s ghost support group, but Aidan makes his case well enough for Zoe to return to the house.

In her own mind, Sally is in a happy dream world with the Reaper (Dusan Dukic), who is now her fiancé Scott. As Aidan, Josh and Zoe try to get through to Sally, she experiences their efforts as instant messages on her computer, but Scott manages to get this away from her.

Scott/Reaper/Sally punishes Sally’s real-world friends by locking them in the house (windows won’t open or break, etc.). Aidan hasn’t had any blood in a day and it’s the full moon, so both vampire and werewolf are not so quietly freaking out. Then possessed Sally wakes up long enough to taunt Aidan, Josh and Zoe, along with revealing that Sally killed Nick. This makes Sally even less willing to help, but Aidan proves he’s a vampire by showing fang and black eyes. This convinces Zoe that they are all going to die if they can’t leave the house, and the only way that can happen is if Sally wakes up.

Zoe enters Sally’s dream world, winding up at Sally’s engagement party, where Zoe’s boyfriend/Sally’s pal Nick is Scott’s best man. In the real world, Aidan loses control of his hunger and starts drinking from Zoe’s arm. Josh pulls Aidan off Zoe, and lays into Aidan about Aidan creating a situation in which two young women died – under their shared roof, no less – so that Aidan’s progeny Henry could feed. Josh is also upset that he seems to be the only one who is trying any more. Aidan breaks down, honestly distraught about the young women.

Josh knows that Aidan needs to feed and offers his own blood. Aidan tries to refuse – he instinctively knows there’s a reason that vampires don’t drink werewolves – but Josh insists. Aidan tries and then gets violently ill, vomiting up blood.

Zoe’s attempts to bring Sally back to reality are rebuffed, until Nick makes a toast for the happy couple, saying he introduced Scott and Sally. Sally remembers this isn’t true – Nick drowned. Nick begins throwing up water and Sally finds herself alone in the bedroom with Scott. Scott tries to convince Sally that he brought her upstairs because she didn’t feel well, but Sally finally deduces the truth. If she’s going to be stuck in the house, she’d rather be with her real friends. She throws herself down the stairs, “dying” in the dream world to wake as herself in the real world.

The house unlocks itself. Sally is grateful to Josh and Aidan. Josh runs out so he can lock himself up before the moon rises. Zoe says she will never forgive Sally for killing Nick, then leaves. Scott the Reaper shows himself to Sally, saying that he is a part of her and cannot leave.

The episode has some genuinely great moments. The painful connection made between Josh and Aidan, as Josh vents about how justifiably violated he feels about Aidan’s actions and Aidan admits he’s out of control, is affecting and very well-acted. The subsequent disastrous attempt by Josh to feed Aidan is simultaneously funny and touching.

Meanwhile, it’s great seeing Rath as Sally get to be carefree and sexy, which she does with great charm. Episode director Paolo Barzman has come up with a nifty visual flourish, with Sally and Reaper Scott showing up in warm Technicolor flesh tones, dressed in bright purple, while everything around them is unobtrusively black, white and gray. As Sally notices elements of the environment, they pop with color. This shows rather than tells us how Sally is processing her hallucination – she can hardly be expected to notice it feels wrong when she can’t see that it looks wrong.

“Dream Reaper” is trippy rather than truly scary, but it lets all of the characters examine their individual natures, showcasing them but bringing them together rather than driving them apart. It proves that, on its game, BEING HUMAN can be fine genre TV.