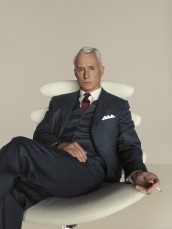 The actor talks the return of AMC's hit series 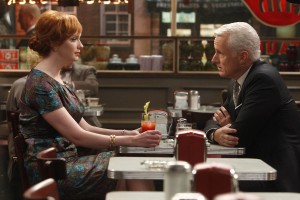 AMC’s hit MAD MEN begins its fifth season tonight in a two-hour block starting at 9 PM, before settling into its regular slot at 10 PM next week. Series creator Matthew Weiner has requested that the press not to give away things like exactly when the new crop of episodes are set time-wise in relation to Season Four, and he’s no doubt also asked his actors to be tight-lipped with details.

John Slattery has been nominated for the Emmy for Outstanding Actor in a Drama Series four years in a row for his portrayal of the suave yet heart attack-prone Roger Sterling, first among partners at advertising agency Sterling Cooper Draper Pryce. The Boston-born actor tells us what he can about the new season, plus what’s come before and what else he’s been doing.

ASSIGNMENT X: How do you feel about all of the changes that have happened for Roger in Season Four?

JOHN SLATTERY: I’m fine with all of them. I’m just glad to be still around.

AX: Did you ever feel that you were in danger of not being around?

SLATTERY: I always feel that way. I mean, you never know what will happen to any of these characters at any given moment.

AX: Do you feel that the tone of MAD MEN has changed in the new season?

SLATTERY: I think it changes all the time. I think with each season the tone changes. I think it thematically changes, the progression of the show chronologically. I think that’s what makes it good. We rebuilt the agency, we started again. Each character goes through ups and downs and I think it continues in that fashion. Nothing is written in stone. All these characters are very complicated. So it isn’t about one thing or another.

AX: Is Roger able to adapt to the changes, or is he breaking under the changes?

SLATTERY: That’s an interesting question, but I can’t say. That you’ll have to see. Some characters do and some characters don’t. As do people. Some people wear the same uniform their whole career. Some people can’t wait to see what the next fashion trend is and go with it. So that’s worth watching for.

AX: At what point in the life of MAD MEN as a series did you really know the show had made an impression on the populace?

SLATTERY: Pretty early on. The reviews were pretty uniformly terrific and it got a lot of attention right away. Jon Hamm won a Golden Globe and the show won the Emmy in the first season, so it didn’t take long.

AX: You were born in the Sixties, but does MAD MEN fit the impressions you had of what its era was like, the stories you heard about it??

AX: Is there anything about playing a character in a story set in the past that’s different than playing somebody in the present?

SLATTERY: No. It’s a moment to moment thing. You don’t play the history, you play the moment. 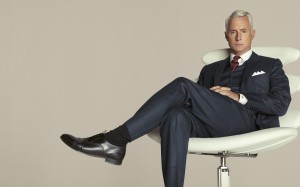 AX: When you do other projects while you’re on hiatus, does it take you a little while to get back into playing Roger, or do you feel like going back to the character is like putting on familiar shoes?

SLATTERY: It takes you a little while to figure out. This year, it was a long hiatus [over a year since the end of Season Four], so it took a little while to get used to being back, but not very long. Once you hit your stride, you’re back in it.

AX: Do you have any other recent projects that we should know about?

SLATTERY: I do have a movie called RETURN that got previewed at Cannes and premiered here in this country at MOMA [Museum of Modern Art] inNew York. [It was released theatrically] in L.A. and New York [and arrives on home video April 24].

AX: That’s about the U.S. Army officer played by Linda Cardellini who comes home from the war?

AX: Who do you play in that?

SLATTERY: I play someone that [Cardellini’s character] meets in a rehab.

SLATTERY: Very unlike, actually. Which is why I did it.

AX: Anything else we should know about MAD MEN right now?

SLATTERY: It’s better than it’s ever been.