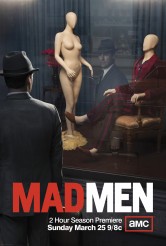 The new Mrs. Draper steals the show with a little French Burlesque!

It feels like AMC’s hit series MAD MEN has been gone forever. The last episode of season four aired in October of 2010, and the show JUST finally came back. Of course there was plenty of rumors as to what was going to happen when the series returned. The speculation alone of what year the show was going to take place in was enough to keep people tweeting and chatting about what might be. Then there are the fans who want spin off  like a Sally Draper (Kiernan Shipka) all grown up series. I hate to break it to fans but I think it’s already been done. It was called MAUDE.

All kidding aside, last season left us with plenty to hypothesize about. Joan (Christina Hendricks) revealed that she was keeping the baby that was fathered by Roger (John Slattery), and Don (John Hamm) decided to marry his secretary Megan (Jessica Pare). Betty (January Jones) was settling into her role as MOMMY DEAREST and Sally was having all kinds of interesting problems adjusting to grown up reality around her. All of that is just a part of what the writers left us with!

Now with the two hour premiere of “A Little Kiss” the show is back and better than ever! Let’s just start with how much I absolutely love the new Mrs. Draper. Megan is a gem. Matthew Wiener is doing everything in his power to make her an irresistible combination of personality traits; from sympathetic to coquettish, in order to make her a superior wife for our leading man. I also love the fact that Betty didn’t rear her snake filled head of hair in this first episode to throw everything off. We love Megan just based on the shadow of the memory of how hideous Betty was the last couple of seasons.

“Zou Bisou Bisou” is one of the most magical moments of the two hour premiere and it happens at such an awesome swinging ’60’s mod party. That musical number makes me think of THE PINK PANTHER when Fran Jeffries sings the song at the ski lodge “Meglio Stasera”. This episode of MAD MEN captured some kind of pure 60’s rhythm in that single scene.

Plus I really love the interaction between Peggy (Elisabeth Moss) and Megan. The two really seem to have a well established dialogue as we joined this season. It will be interesting to see where Peggy will go confronted with a more honest and open woman (who really acts as a foil for her former self ala season one). I do like the confidence we are seeing in Peggy now, she’s come a long way from season one and I would almost expect her to be running the firm whenever the series decides to end in the far future.

Don’s kids are in the start of the first episode to help establish his life to any potential new viewers, and did any one notice he has a new son…yet again?! I know that Jared Gilmore who played Don’s son the last couple of seasons is on ONCE UPON A TIME now.

Big cheer for new cast member Christine Estabrook as Joan’s mom! She is absolutely fantastic and adds an interesting level of humor to Joan’s situation that is completely different from the acerbic wit that the character of Joan herself has always had.  The two play off each other exceptionally well and I would rather see her in the picture instead of Joan’s rapist husband.

Of course Roger steals EVERY single scene he is in. Whether he is making snide remarks at a partner’s meeting or seductively dancing up to Don singing “Frere Jacques” he still is hands down one of my favorite characters on the show. His quick one liners and his ability to find something to say about almost every situation is priceless. MORE ROGER STERLING!

Harry Crane (Rich Sommer) looks good this season. He’s lost a bunch of weight and looks every bit the up and coming TV man that he is supposed to be. He should be looking slimmer and more clean cut since he’s the guy who actually goes to LA to do business with the people of Tinseltown.

Then on the flip side of the coin it’s interesting to see them downgrade Pete (Vincent Kartheiser). He’s a little bit less pressed and folded than he was, and now that there’s a baby in the house and he lives outside the city, he seems to be a bit more rumpled and flustered than he was before. Of course I’m really waiting for Roger to deck him this season.

MAD MEN is beautiful to look at. Every frame of the show is shot like it’s a period movie. Production value from the genius costumes designed by Janie Bryant to the look of the set and the props; everything is top notch.

The best line of the episode goes to Lane (Jared Harris) when describing Don’s reaction to his wife’s burlesque at the birthday party, “I saw his soul leave his body.”

It’s nice to have you back MAD MEN. Stick around for a long, long time!