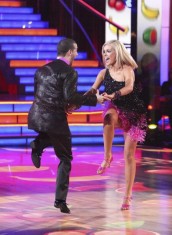 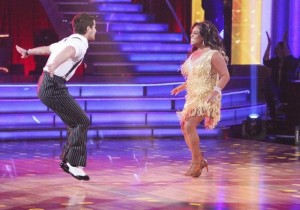 And so the DANCING WITH THE STARS contenders break away from the pack. This week showed us just who has got what it takes and who does not. However, this isn’t rocket science here.  Most of those who did well last week, continued to do so this week and those who did just all right the first week, didn’t do so great the second week. The idea is you have to get better and better so that in the last two weeks you expect “10s”!

Now, granted, everyone can have a bad week, I am talking to you Jaleel White, but most of the time you have to hold up all throughout the entire 10 weeks. Katherine Jenkins and Mark Ballas did just that tonight. So did William Levy and Cheryl Burke. Roshon Fegan, too, along with Chelsie Hightower stepped it up and held strong. Sadly in the second week you truly see not necessarily who will win but rather who will not. Martina Navratilova with Tony Dovolani – sorry buddy not this season either, Gavin DeGraw with last season champ Karina Smirnoff – no double win for you, Gladys Knight with Tristan MacManus – at least you don’t have to dance with Nancy Grace anymore, and Melissa Gilbert with Maksim Chmerkovskiy – so close yet no cigar, yet again, are likely to not make it to week 10. But, you never know! After all, it’s DWTS! 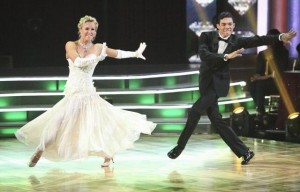 Melissa Gilbert (actress) and her partner Maksim Chmerkovskiy
She had some pretty good moments but not good enough. Goodman called out her Quickstep as lacking in energy. Inaba told her to lower her shoulders. Tonioli said overall, it was good.
Scores: Inaba – 7, Goodman – 6, Tonioli – 7, Harland – 7

Martina Navratilova (Tennis Pro) and her partner Tony Dovolani
She looked completely lost. I felt for her. Goodman said her Jive was too neat. Inaba just praised her for being there. Tonioli said the serve went right into the net.
Scores: Inaba – 6, Goodman – 5, Tonioli – 6, Harland – 6 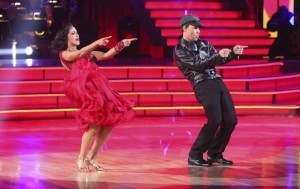 Gladys Knight (music legend) and her partner Tristan MacManus
The Quickstep is not her dance. She could not keep up with MacManus. Goodman said he did not appreciate her dance. Inaba called her frame off. Tonioli said she played it well.
Scores: Inaba – 7, Goodman – 5, Tonioli – 7, Harland – 7

Roshon Fegan (Disney star) and his partner Chelsie Hightower
He is so agile and entertaining. Tonioli said he had more sparks than a bolt of lightening.  Inaba thought his technique in his Quickstep was amazing. Goodman liked it!
Scores: Inaba – 9, Goodman – 8, Tonioli – 9, Harland –8

Sherri Shepard (actress/TV host) and her partner Val Chmerkovskiy
Her new nickname is “The Entertainer”. She knows how to please a crowd. Tonioli called her Jive a shake rattle and roll performance. Inaba said it was freakin’ phenomenal. Goodman felt “good” when he watched her dance.
Scores: Inaba – 8, Goodman – 7, Tonioli – 8, Harland – 7 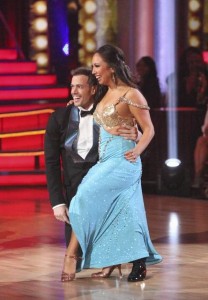 Gavin DeGraw (singer) and his partner Karina Smirnoff
It’s kinda funny to watch him dance. It’s like Goofy doing a Latin number, silly, yet, not appropriate. Goodman said it was an improvement from last week. Tonioli enjoyed his Jive. Inaba said his posture was funky.
Scores: Inaba – 7, Goodman – 7, Tonioli – 7, Harland – 7

William Levy (actor) and his partner Cheryl Burke
Flair! He’s got it. However, Latin fits him much better. Inaba called him the Harry Connick, Jr. of the ballroom. Tonioli called him a matinee artist. Goodman wanted more body contact, with his partner, that is.
Scores: Inaba – 9, Goodman – 7, Tonioli – 9, Harland – 8

Jack Wagner (actor/singer) and his partner Anna Trebunskaya
He can wiggle with the best of them. Goodman liked the content. Inaba said he overdanced his Jive. Tonioli said he gave it his all.
Scores: Inaba – 7, Goodman – 7, Tonioli – 7, Harland – 7

Who’s going home: Navratilova is the likely candidate. Poor Dovolani, he hasn’t gotten to the finals since season 2! This season ain’t any different!

Who Has Legs To Take Home The Mirror Ball:
And so the leaders break away from the pack. There are four contenders at this point – Fegan, Jenkins, White and Levy. The dark horses are Menounos, Shepard and Driver. Stay tuned.

UPDATE: Who was eliminated – CLICK HERE to find out …

Blu-ray and DVD picks of the week including RISE OF THE PLANET OF THE ...
CD Review: BETTER LIVING THROUGH CHEMISTRY soundtrack
RYAN HANSEN SOLVES CRIMES ON TELEVISION: Samira Wiley on Season 1 of t...
Movie Review: ENTANGLEMENT