Home » DANCING WITH THE STARS Season 14 Recap: Martina Navratilova is the first to go 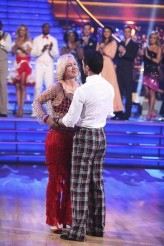 DANCING WITH THE STARS Season 14 Recap: Martina Navratilova is the first to go

No one wants to be the first to go, but, alas, someone has to go first. So, when Martina Navratilova (I finally figured out how to spell her name right and now she’s gone) was ousted first on DANCING WITH THE STARS – Season 14 it was no surprise. Navratilova, along with partner Tony Dovolani, had the lowest marks and with a performance last night full of errors, it was only fitting that she be eliminated. Still, it’s always a sad moment to see someone go…especially first. Poor Dovolani will not get his hands on that mirror ball trophy yet again. He hasn’t even been close to it in a long, long time. In fact, the closest Dovolani ever got was with George Clooney’s now girlfriend Stacy Keibler in season two where he and Keibler placed third.

DWTS Season 14 – The Results started out with all the pros and the DWTS Troupe performing a quick number and then, because there are 12 couples to get to, we were thrust right into the elimination process. First safe were Melissa Gilbert and Maksim Chmerkovskiy. Gladys Knight and Tristan MacManus promptly followed right before Navratilova and Dovolani were told they were in jeopardy. A smooth country rock performance by Matt Nathanson and Sugarland interrupted the eliminations while MacManus and Peta Murgatroyd accompanied them on the dance floor.

Next safe were Jaleel White and Kym Johnson, then William Levy and Cheryl Burke. Levy has such a huge fan base he could probably have gotten all 5s from the judges and still been voted through! Roshon Fegan and Chelsie Hightower weren’t so lucky, they were told they too were in jeopardy. A quick video segment with the stars telling how disappointing it would be to go home first was followed by a DWTS Troupe number. Then, back to business, in an all-at-once moment Sherri Shepard with Val Chmerkovskiy, Maria Menounos with Derek Hough and Katherine Jenkins with Mark Ballas were all told they were safe.

Sugarland jumped back on stage for a soulful number before we heard that Donald Driver with Peta Murgatroyd and Jack Wagner with Anna Trebunskaya were the 8th and 9th couples safe. Fegan, DeGraw, Navratilova and partners were the three duos left standing before Fegan and Hightower were let off the hook, leaving just two couples remaining before Navratilova and Dovolani were finally given the word…it’s time to go. Oh well, Dovolani, there’s always Season 15! Stay tuned!