Home » Analysis: Is DANCING WITH THE STARS a Popularity or Talent contest? 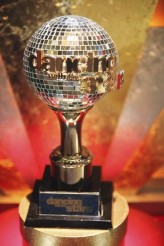 Analysis: Is DANCING WITH THE STARS a Popularity or Talent contest?

Looking back at past seasons, if the judges scores were all that counted, the winners would have been drastically different 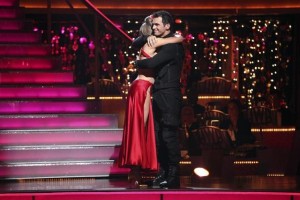 There were a lot of people up in arms over the early dismissal of Chynna Phillips last week on DANCING WITH THE STARS. A few were still peeved over the Kristin Cavallari debacle the previous week as well. So, I decided to do a little investigating and looked up all the scores from seasons 1-12 and compared the scores of the runners up to the official winners to see just how much of an influence the audience actually has in determining the winner. In other words, I added up all the judges’ tallies alone.

You might be surprised by what I discovered. It turns out, only half of the proclaimed winners on DWTS were actually the judges’ picks. Now, if the judges’ and only the judges had their say we would not have had such popular winners like Emmitt Smith or Donny Osmond. The very first winner Kelly Monaco did in fact lose to John O’Hurley, if it were up to the judges. Mel B. did kick Helio Castroneves butt and yes, Gilles Marini beat out Shawn Johnson.

The biggest surprise and the only time on the 12 seasons to ever have this happen was what happened last season. Hines Ward was so popular that not only did he beat runner up Kirstie Alley, he also beat the “real” judges’ winner Chelsea Kane and she came in 3rd ! Kane would have easily blown Ward away on points alone, but it wasn’t even close, even without her extra 15 points she earned in the instant ChaChaCha contest. 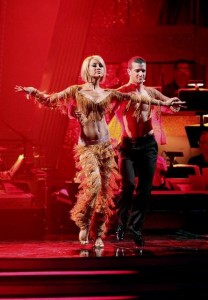 Was Chelsea Kane and Mark Ballas the real winners of DANCING WITH THE STARS - Season 12 ? | ©2011 ABC/Adam Taylor

Also of interest are the season 2 stats. Winner Drew Lachey actually tied with Stacey Keibler who placed third. Jerry Rice ended up in 2nd place only after Keibler did a very disappointing free style.

Jennifer Grey, Apolo Anton Ohno, Kristi Yamaguchi. Brooke Burke and Nicole Scherzinger all won both the populist vote and the judges’ accolades. Smith, Osmond, Monaco, Castroneves, Johnson and Ward may have been the judges’ second or even third choices but the fans, well, they showed them an enormous amount of love.

In the end, we all have to remember something. This is not rocket science. Nor is this the absolute in a precise scoring and definitive “talent” contest. Many a time, believe me, I have been upset over who won and who didn’t – Mario Lopez for one. However, in the end, it’s all fun. It’s a little of this and a sprinkle of that. Sometimes the judges’ picks win, sometimes the fans’ picks do. Without both of their inputs the show just wouldn’t be the same. It’s showbiz. There’s a reason why it’s on TV. It’s entertaining. All you can do is vote for those you like and then hope others – including the judges – like them too!