TV Review and Recap: DANCING WITH THE STARS – Season 13 – Week 3 – “The Most Memorable Year of My Life” 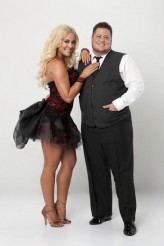 TV Review and Recap: DANCING WITH THE STARS – Season 13 – Week 3 – “The Most Memorable Year of My Life”

Once again Ricki Lake and J.R. Martinez rise to the top

Tonight on DANCING WITH THE STARS was all about emotion. It was “The Most Memorable Year of My Life” night and boy did we get to know the celebs intimately with their performances tonight. But, nothing, and I mean nothing was as powerful as J.R. Martinez and Karina Smirnoff’s Rumba. Martinez dedicated his dance to all those who don’t come home from the war. It was intense. It was emotional. It was breathtaking.

Rob Kardashian dedicated his dance to his late father. Chynna Phillips danced in spirit of a year where she got her self together and on the wagon. Chaz Bono, last year of course was his most pivitol one. Kristin Cavallari thought the year she decided to become an actress was a memorable one. Carson Kressley applauded the year QUEER EYE FOR THE STRAIGHT GUY came on the air. Nancy Grace thought of her twins when dancing to “Moon River”. Ricki Lake saw a lot of transformation in herself last year when she went through a difficult divorce. Hope Solo danced in honor of her team making it to the World Cup. And David Arquette said last year was memorable because of the dissolution of his marriage and him turning to alcohol to get over it.

Everyone has a story and through dance we saw some of their stories tonight on DWTS. In turn, the judges were quite generous, except to Bono who landed in last again with only 18 points. Lake took the top slot with 27 while Martinez and Phillips tied, again, for second this time. Tomorrow night will be memorable for one of these celebs for a very different reason – someone is going home.

Chynna Phillips (actress) and her partner Tony Dovolani
She has exquisite lines and her legs are gorgeous, a little jerky though. Inaba said she was stunning to watch. Tonioli went blue saying she was a smoldering siren. Goodman thought, with her Rumba, Phillips has taken this competition to a whole new level.
Inaba – 8, Goodman – 9, Tonioli – 9, Harland – 8

Nancy Grace (TV host) and her partner Tristan Macmanus
They should rename her Nancy Grace-ful…OK, that was too easy but someone had to write it. Goodman thought Grace showed emotion with her Waltz. Inaba said it was like watching a live-action lullaby. Tonioli told her to carry her lines all the way through.
Inaba – 7, Goodman – 7, Tonioli – 7, Harland – 7

David Arquette (actor) and his partner Kym Johnson
Smooth and with feeling, that is Arquette in a nutshell. Goodman said he was proud of him. Tonioli thought his Rumba was achingly romantic. Inaba thought it was a very nice comeback.
Inaba – 8, Goodman – 8, Tonioli – 8, Harland – 7

Hope Solo (Soccer Olympian) and her partner Maksim Chemerkovskiy
This dance started off almost x-rated. She was dressed sexy and sultry but she looked very much like a fish out of water. Goodman would have liked to have seen some sharper action in her Cha Cha Cha. Tonioli called her a sexy minx. Inaba thought she saw potential in her.
Inaba – 8, Goodman – 8, Tonioli – 8, Harland – 7

Carson Kressley (fashionista/TV host) and his partner Anna Trebunskaya
He always brings a comedic turn to his dances. You can never take him too seriously. Goodman said he put the “boy” in flamboyant. Inaba just said I LOVE YOU! Tonioli thought his Tango was insanely brilliant.
Inaba – 8, Goodman – 7, Tonioli – 8, Harland – 7

J.R. Martinez (U.S. veteran/actor) and his partner Karina Smirnoff
B-e-a-u-t-i-f-u-l! Never has a dance brought me to tears before, until now. By far, the most emotional and tender moment ever on DWTS. Tonioli said he danced his Rumba from the heart. Goodman thought it could have had a little more musicality to it. Inaba thought that he did something extraordinary with his dance.
Inaba – 9, Goodman – 8, Tonioli – 9, Harland – 9

Ricki Lake (TV host/actress) and her partner Derek Hough
Very nicely done, she is quickly becoming the one to beat. Goodman simplified his reaction to a “well done”. Inaba said “Ricki Lake is on fire!” Tonioli thought every move was wonderful.
Inaba – 9, Goodman – 9, Tonioli – 9, Harland – 8

Chaz Bono (activist) and his partner Lacey Schwimmer
Well, he’s moving better each and every week, but at this point it may not be enough to pull him through yet again. Goodman thought his Rumba was his best dance yet. Inaba said he wasn’t focused in the dance. Tonioli also said he looked a little bit lost in the dance.
Inaba – 6, Goodman – 6, Tonioli – 6, Harland – 6

Who will go home? – Well, if it’s not Chaz Bono I will be shocked! If Bono stays it will be a true testament to what a huge following he really does have. If he stays, Nancy Grace goes. We’ll see tomorrow. Stay tuned!