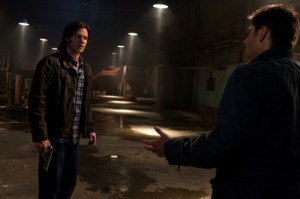 The SUPERNATURAL episode “Hello, Cruel World” has a lot to recommend it. For starters, the script by Ben Edlund makes diabolically clever use of recycling Dr. Sexy (remember that character?) as a way of providing a hilarious/horrific misinterpreted mission statement to a monster, and by bringing back grumpy but plucky ally Sheriff Jody Mills (Kim Rhodes), not to mention Mark Pellegrino’s oh-so-relaxed Lucifer. Where it falters, oddly, is in the emotional beats. Sam (Jared Padalecki) and Dean (Jensen Ackles) have faced devastating loss and catastrophe so many times before that their reactions feel a little re-used. The actors, writers and even the characters seem to know this, too, so what seems intended as profound misery comes off more as a quizzical funk.

“Hello, Cruel World” picks up right where “Meet the New Boss” left off, with Leviathans now inhabiting the body of Castiel (Misha Collins) and ready to deliver Purgatorial whupass unto the boys and Bobby (Jim Beaver). Fortunately for our heroes and unfortunately for the Leviathan clan, Castiel’s body is still about to explode, unable to contain the spirits inside. The Leviathans/Castiel run into a lake that serves as the regional water supply. The body sinks underwater and evidently explodes – Castiel’s empty trench coat washes up onto the shore as Dean and Sam realize that Leviathans in the drinking/washing water doesn’t bode well.

Sure enough, the Leviathans possess a number of people, who kill and eat other people. This takes a particularly dark turn when a Leviathan, temporarily in the body of a little girl, sees an episode of the “Dr. Sexy” show and hears dialogue commenting on how surgeons can cut into whoever they like and remove whatever they want. In no time, this Leviathan has gotten into the body of a surgeon (Cameron Bancroft) at Sioux Falls Hospital and brings in a colleague (Benito Martinez) to get more Leviathans into other hospital staff.

Sheriff Jody Mills (Kim Rhodes), in for an appendectomy, sees the surgeon behaving oddly and then catches him in monster-face (the Leviathans sprout huge LITTLE SHOP OF HORRORS Audrey II maws when they are hungry or angry). Heavily sedated against her will, Jody calls Bobby for help. He rescues her, but they need reinforcements to deal with the Leviathans at the hospital.

Meanwhile, Sam is being visited by Lucifer, who insists that Sam is really back in Hell and just hallucinating being back with Dean and Bobby. Everything is awful in the hallucination because, well, Sam wouldn’t believe it was real if it was any better. Dean and Bobby are both concerned about Sam’s mental health. Lucifer really pulls a fast one when he impersonates Dean and almost causes Sam to shoot the real Dean. Real Dean, drawing on his own memories of Hell, gets Sam to remember that Hell feels different from this reality, and gets Sam to open the wound in his hand to prove the point. Dean and Sam tangle with the surgeon Leviathan. They seem to get the upper hand (maybe), but they are both severely injured and are being taken by ambulance to … Sioux Falls Hospital.

There’s plenty of how-will-they-get-out-of-this jeopardy that’s good. Pellegrino is great as always and Bancroft does a nice job of being beamingly creepy in a Stepford way. However, for beings that are “older than souls,” the Leviathans so far seem to be proceeding in a pretty conventional demonic manner. They refer a lot to a “boss” we have yet to meet, but their motives, agenda and methodology are not new to the SUPERNATURAL universe. As for Bobby trying to comfort Dean after Castiel’s apparent death, Dean trying to appeal to Sam’s saner nature and Sam’s confusion about whether he’s in a fit state to help anyone with anything, there is a lot of trepidation here, and it’s not just the characters being cautious with each other’s sensitivities. No one seems to know exactly how to make this fresh and painful and dangerous. Numbness is probably a valid choice at this point in the proceedings, but when it ends, it would be good to see a fresh take on some of these habitualWinchester issues.

This said, it’s fun to have the episode both begin and end with a cliffhanger, and big, toothy, people-eating unearthly entities are always welcome here.