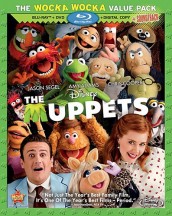 A welcome return to the big screen with Kermit, Miss Piggy, Gonzo, Fozzie and the rest of the gang plus a few new characters to boot

For a while there, it looked like the Muppets were a dying franchise, plucked by the Walt Disney Company for merchandising purposes, but lacking the focus to re-energize them and bring them into the 21st Century.

Thank goodness for Jason Segel – a self-professed Muppets fans who along with fellow screenwriter Nicholas Stroller has brought the luster back to the Jim Henson created characters with THE MUPPETS.

A thoroughly enjoyable film that brings back the spark that was evidenced in 1970s THE MUPPET SHOW and the first three theatrical films (THE MUPPET MOVIE, THE GREAT MUPPET CAPER, MUPPETS TAKE MANHATTAN), this movie brings characters like Kermit, Miss Piggy, Gonzo and Fozzie Bear into the present, but does so while referencing the hard times they’ve had for being relevant in a society that has left them behind.

It’s a great conceit and is anchored by the A-story of brothers Walter (a Muppet) and his human brother Gary (Segel) who travel to Hollywood with Gary’s fiancée Mary (Amy Adams) only to get involved in bringing the Muppets back together to save their building (and their own copyright).

The film is quite meta, breaking the third wall in ways only the Muppets know how. There’s a little bit of THE BLUES BROTHERS in how the gang is brought back together. The humor is also quick-witted and fast, while still keeping with the innocence of what made the Muppets so great to begin with.

Walter is an excellent addition to the Muppet cannon, and while we won’t question how a mother had both a human and Muppet child (something tells me she and the sewing machine were lot closer than we realize), it’s their bond which glues the movie together.

Even without original voices for Kermit and Miss Piggy, the energy is still there for all the characters.

However, there are few downsides. Kermit seems terminally depressed throughout the film. In fact, it gets a bit troublesome at times. Kermit, generally a very happy frog, mopes around throughout most of the movie. Yes, his character needs to grow, but at times it feels like he’s ready to commit Muppet-suicide and pull out his stitches because things are so bad.

The lack of big name celebrities is also a bit of a bummer, because that’s what made the other films so great. Yes, Jack Black appears as do a few others, but it would have been nice to have integrated a few more familiar faces into the mix to lend the movie star power above and beyond our Muppet friends and leads Segel and Adams.

Songwise, the movie is on target. There are tons of great musical moments and some are just as good as “Rainbow Connection” which was featured in THE MUPPET MOVIE and it gets a reprise here.

The 3-disc combo pack WOCKA WOCKA VALUE PACK Blu-ray also includes the DVD, a digital copy and even cooler – a download of the actual soundtrack album. It’s an overwhelming strong package (which Disney’s Blu-rays are known for) and definitely makes this a great bargain.

The special features are also plentiful. The blooper reel (a long one) is actually quite entertaining, because they don’t feel staged or planned – these are actual bloopers with the Muppets which is pretty weird at times, but entertaining nonetheless.

The making of featurette dubbed “Scratching The Surface: A Hasty Examination Of The Making Of The Muppets” is  an entertaining mixing in interviews with the cast and the Muppets themselves. It’s almost like a mini-movie detailing the return of the Muppets, with the Muppets in character. There are additional gags and more inspired funny moments.

The deleted scenes are also quite revelatory. It adds more back story and my complaint with the lack of star cameos is answered in the deleted scenes. Billy Crystal and Rob Coddry pop up. Sadly though, their bits aren’t funny and deservedly ended up on the cutting room floor.

There’s also the full “Tex Richman Song” – a very extended sequence that’s actually funny, but it probably was a bit too bizarre watching Chris Cooper rap for younger kids any longer than he does in the actual film which is why it was truncated for the finished film.

And all of the trailer parodies that Muppets did prior to the release are also included. Thrown in some audio commentary and few other surprises and this is a Christmas present for Muppets fans. Add up the running time and all the additional material gives you what’s technically a bonus movie on top of the theatrical film.

THE MUPPETS is a grand return to a simpler era of children’s films. The fact that people who grew up with The Muppets showed up to see the movie and it also nabbed a whole new generation that have embraced them as well — it only bodes well for future installments. After exhausting the idea of putting the Muppets in new takes on old classics (TREASURE ISLAND, A CHRISTMAS CAROL) and running the franchise into the ground with MUPPETS IN SPACE (and those endlessly crap-fest made-for-TV movies), it’s nice to see Jim Henson’s legacy live on in the way that would make him proud.