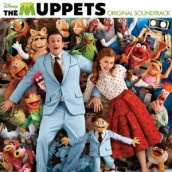 It's finally time to play the music

It’s time to play to play the music, and light the lights after way too long a spell without Muppets tunes to delight. Now innocent kids, old coot fans and spoof-loving hipsters will find equal fun in the fresh approach taken by the FIGHT OF THE CONCORDS directing-songwriting team of James Bobin and Bret McKenzie, who treat THE MUPPETS with equal parts joyful, un-ironic fun and gentle in-jokes- winningly re-creating a tuneful formula that first helped Jim Henson’s creations find an audience way outside of a children’s puppet show. Now that recipe is likely do the same for this sweet revamp that brings the band back together, along with a couple of clucking chickens.

It’s fitting that Mickey Rooney shows up for a sec in the Muppet’s first number “Life’s a Happy Song,” whose ultra-happy metaphors sum up a “Let’s put on a show” energy straight out of a 1940’s production number. This proves a delicious contrast to Chris Cooper, who does a priceless gangsta rap on being filthy rich for “Let’s Talk About Me.” Human star Jason Segel gets his moment to belt out a soulful number while looking into the mirror for “Man or Muppet,” while love interest Amy Adams engages in a disco duet of self-affirmation with Miss Piggy for “Me Party.”

Where classic numbers by Paul Simon and Jefferson Starship embody the Muppets’ can-do energy, McKenzie’s captures their knack for spoofs with Fozzie Bear selling a motel’s Reno amenities to a “Moopet” mangling of “The Rainbow Connection,” while the Muppet Barbershop Quartet does a priceless a Capella version of “Smells Like Teen Spirit.”

Even though nearly every song from a whistling classical pastiche to chicken clucking has a satirical element, there’s true emotion that makes you feel, as well as laugh with these iconic characters, whether it’s Kermit doing a hilariously heartfelt look at past friends for “Pictures in My Head,” or giving a soulful banjo rendition of Kenny Acher and Paul Williams’ classic song “The Rainbow Connection.” It’s a performance guaranteed to make Muppets acolytes misty-eyed, all while they tap their toes to a spot-on take on Jim Henson and Samuel Pottle’s “The Muppet Show Theme.”Where some of these numbers might seem a bit clipped in the film, their full versions are wonderfully present in the Disney Records album. Taking a “storybook” approach to the songs, THE MUPPETS incorporates a lavishly laid-out booklet of lyrics and pictures along with the film’s best sound bytes, the witty asides of puppets and their human enablers making you feel like you’re taking a fun road trip with them back to the Muppet big time.
Clink on the link to buy the soundtrack