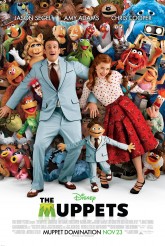 At long last Jim Henson's Muppets are back on the big screen!

I grew up watching THE MUPPET SHOW (and, yes MUPPETS TONIGHT). There are pictures of me dancing to the theme song in my footie pajamas, and I was one of those kids that had a lot of the Fisher Price Muppet puppet toys and played my GREAT MUPPET CAPER record until it broke (literally).  And yes I still have a lot of my Muppet stuff, and my replacement record for the one that got played to death. So needless to say I’ve been saddened the last couple of decades as the Muppets slid into obscurity and more and more generations of kids have no idea who or what makes the Muppets so special.

There have been several Muppet movies, starting with THE MUPPET MOVIE in 1979, and then ending their theatrical run with MUPPETS FROM SPACE in 1999. Yes, the story of the Muppets on the big screen has been an up and down one. The original classic three Muppet films: MOVIE, GREAT MUPPET CAPER, and THE MUPPETS TAKE MANHATTAN stand together as a nice part of Muppet history and a continuation of THE MUPPET SHOW. Then following the untimely passing of Jim Henson, audiences had THE MUPPET CHRISTMAS CAROL (which is still a film that HAS to be watched every holiday season), MUPPET TREASURE ISLAND and ending with the lackluster MUPPETS FROM SPACE.

Somewhere in there Disney acquired the rights to the Muppets and made a series of TV specials, the most offensive of which was MUPPET WIZARD OF OZ, a cobbled together version of OZ plus some really great actors, some funny bits, but unfortunately nothing that made it stand out or magical in the spectrum of Muppet film.

Now, finally, we have a new movie that is just THE MUPPETS! Getting back to the core of what made the Muppets great in the first place, stories about life and love and all kinds of inspirational messages brought to you with your favorite characters from the Muppet stage.

First let’s address the human elements of the movie, Jason Segal plays Gary who I only kind of know from HOW I MET YOUR MOTHER (and I must be the only person on the planet who doesn’t know his career) and Amy Adams play Mary. The two are a cute love-struck couple from a small town in Middle America who are heading to the big city of Los Angeles to celebrate their 10th anniversary. Gary’s brother Walter (who happens to be a Muppet) tags along to get the chance to meet his childhood heroes The Muppets, and ends up finding where he really belongs in the world. There is of course a plot involving the Muppet theatre being purchased and used for nefarious deeds by evil CEO Tex Richman (Chris Cooper), and that leads us to the reunion of all of the Muppets to put on a new show and save the day.

THE MUPPETS is a movie that just makes you feel good. It’s really nice to see Kermit and Piggy and the gang back up on the big screen as themselves and not inhabiting other characters from literature. The voices and performance of the Muppets are well-done, but of course there are a few drops here and there that will furrow your brow and make you wonder what was going on with the puppeteer that day (in other words points where the character doesn’t really sound like themselves for a moment).

The music is catchy and the high point is a familiar tune sung during the Muppet’s telethon that I defy anyone to keep a dry eye during. The telethon itself is a love letter to the original MUPPET SHOW, and there are tons of nods to Jim Henson and other guests and performers of yesteryear that are no longer with us today, so keep a sharp eye out in a lot of the backgrounds.

The low point musically is a rap song in the middle of the film performed by the evil CEO Richman, which only has the redemptive quality of having Bob Mackie showgirl costumes from the EC2 rental house as part of the number, adding just a hint more of the variety show feel of the original MUPPET SHOW.

The human story leading into the Muppet’s story takes a bit for me, and while Segal and Adams are charming, the schmaltz seems a bit over the top even for a Muppet movie, and it gets to be a little bit irritating while you wait for the reason you go to see the movie to show up on screen. Having said that, once the Muppets do show up, you completely dismiss the earlier moments of the film and get sucked into the nostalgia of yesteryear and by the time the movie ends you will want to see more of the Muppets on screen!

On a side note, if you live in the Los Angeles area, make sure to see THE MUPPETS at the El Capitan Theatre in Hollywood – you will be viewing the movie in the theatre that is used in the film as the exteriors of the Muppet’s theatre which makes it just a touch more special!

THE MUPPETS is a fun movie that will hopefully generate several new generations of Muppet fans and followers, and remind everyone out there why the Muppets are so fun and magical and need to be around for decades to come.