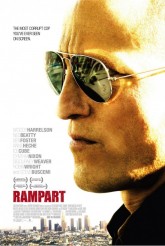 The film RAMPART takes its title from an area of Los Angeles, the police precinct of that area and the enormous scandal associated with both. For those who don’t remember, in 1999, the LAPD Rampart Division was revealed to have an unusually high percentage of corrupt officers who brutalized, blackmailed and otherwise abused the citizens they were meant to be protecting.

Rather than document these historical events, RAMPART uses them as a backdrop for a single LAPD detective, Dave Brown (Woody Harrelson), who misuses the prerogatives of his job for any number of bad actions, but who isn’t tied directly to the Rampart scandal. Dave hassles a female rookie, rousts people buying lunch of the basis of race and beats up suspects in the interrogation room, as well as using his badge to get drugs sans prescription from a pharmacy.

Dave is also known as “Date Rape Dave,” not because he has engaged in the activity, but because he may have killed a serial date rapist in circumstances that have never been proved. However, Dave doesn’t get into real trouble until he’s sideswiped in traffic. Dave takes off on foot after the other driver and kicks the man within an inch of his life. Unfortunately for Dave, this is caught on camera. Since Dave is adamant about not taking a settlement and leaving the force, he lawyers up. Dave also has a complicated living situation with two ex-wives (Cynthia Nixon, Anne Heche), sisters who live next door to one another, with one daughter each, teenager Helen (Brie Larson) and young Margaret (Sammy Boyarsky). Margaret still loves her dad unconditionally; Helen (Brie Larson) knows enough about her father to be even more scornful than most adolescents are toward parents. Worried about finances, Dave goes to his mentor (Ned Beatty), a former cop who lauds Dave’s law-abusing ways. Dave takes the mentor’s advice, but in this case, it seems that Dave may have been set up. Then again, Dave could just be paranoid.

Harrelson is so riveting as Dave that almost until the end, he succeeds in making us anticipate that there is more here than meets the eye. The actor layers Dave’s scorching rage with calculation, humor, competitiveness, loneliness – he’s never feeling or thinking just one thing. Watching Dave go up against Sigourney Weaver’s canny, incredulous police official Joan Confrey is the best kind of dramatic spectacle. Weaver plays Confrey as someone who has seen everything and still can’t quite believe that Dave is this brazen, while Harrelson gives us a man who is putting on unswerving offense as his only defense. There’s no sense at all that the actors are working off a script; they play it as though any outcome is possible.

There’s nothing wrong with the rest of RAMPART, except that both the title and the tilt of the script by James Ellroy and director Oren Moverman (who also helmed Harrelson in THE MESSENGER) make us expect things that don’t happen. Dave is a severely crooked cop, but he’s not engaged hugely in the types of crimes that caused the Rampart scandal. Harrelson is compelling as Dave, but the character is a lone wolf and his off-the-force mentor is not shown to be part of any specified group. There’s nothing here that illustrates how an entire police precinct colluded to cover up the misdeed of its officers. It’s fine for RAMPART (or any other movie) not to be about corrupt cops plural, but it makes for a distracting backdrop. Then there is the mystery Dave winds up chasing about whether and why he’s been encouraged to perform an illicit illegal act that has tremendous blowback. RAMPART is more a character study than a thriller, but the investigative aspect of the film is given enough emphasis for the resolution to feel unsatisfying.

Still, RAMPART is very good at showing us a man who cannot come to terms with controlling his fury for long, and Harrelson makes us believe he exists.