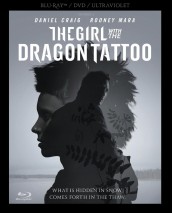 Also worth checking out: BATTLE ROYALE: THE COMPLETE COLLECTION, THE SITTER and more 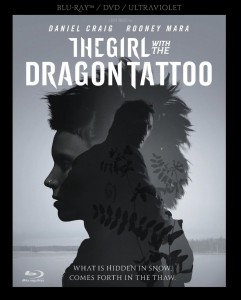 THE GIRL WITH THE DRAGON TATTOO | © 2012 Sony Pictures Home Entertainment

THE GIRL WITH THE DRAGON TATTOO – First of, Rooney Mara. Wow. Way to give it all (and I do mean all in terms of body and soul) into a character. So much better than Noomi Rapace. Not in terms of acting but in terms of just being attractive. Mara is hot as hell even dressed as an emo chick that has a laundry list of problems longer than a family with 12 kids. Of course, the film is based on the über popular books that was turned into a series of movies in Sweden about a missing girl from a posh Swedish family and a journalist hired to find her. The journalist with the help of Mara’s character of Lizbeth Salander discover a worse secret involving immigrants getting murdered all across Europe with ties to this same family. By basing the film in Sweden, it gives that same feeling from the books and the Swedish movie but with enough new stuff that makes it all Hollywood. Luckily, for fans (and those that enjoy seeing Mara naked) there are two other books that will be filmed. I recommend getting the three-disc version that includes the Blu-ray, DVD and digital copy. So you can watch it on the plane and embarrass the person next to you. 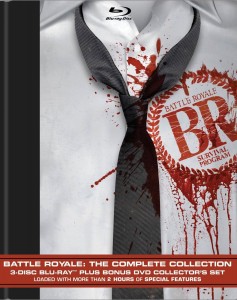 BATTLE ROYALE: THE COMPLETE COLLECTION – While many have compared THE HUNGER GAMES to a knock-off of BATTLE ROYALE, there have been enough evidence that points to while similar in core storyline, they are far from the same. I haven’t seen THE HUNGER GAMES nor read the books so I do not know much more than what I have heard or seen in trailers about the film/book, but I know this: BATTLE ROYALE is a brilliant piece of filmmaking. The Japanese classic centers on a time in Japan where youths have become beyond unruly and disrespectful but violent toward their elders. So, in response, the government passes an initiative to set them straight – by entering an entire random class of students into a deadly game of survival of the fittest. The goal? Be the last one alive. If you do so, you live and get to live your life. But you can only do it once the other 40-something kids have been killed. They are all sent on an island and given various weapons. What follows is as brutal, heartbreaking and harrowing about the plight of youth you’ll ever see. This set includes not only the classic film now in high def, but BATTLE ROYALE 2 also in high def and a set of new and legacy special features. BR2 is alright but nowhere near captures the originality and fun of the first film. There are some cool new features on the set too so if you are a fan of the film and own it on DVD, this is well worth the upgrade to Blu-ray. 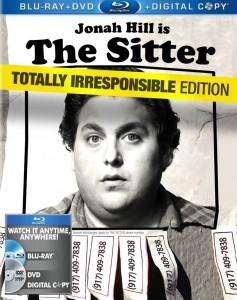 THE SITTER – Jonah Hill made his start in comedy with SUPERBAD and KNOCKED UP, then later in GET HIM TO THE GREEK. Unfortunately, THE SITTER is not nearly as good as any of these titles. The storyline isn’t original: a jobless twentysomething does a favor for his mother to babysit the neighbor’s unruly children only to find himself along the way. Of course, through it all we get loads of slapstick non-humor, non-danger, plenty of toilet humor, some adventure and more. Hill isn’t bad as he usually can work with whatever he’s given but the material here just doesn’t give him much to lean on. Worth watching just for a few funny moments but nothing you’ll remember for any time. 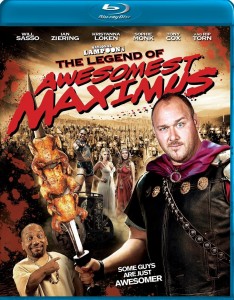 NATIONAL LAMPOON’S THE LEGEND OF AWESOMEST MAXIMUS – Sigh, another spoof on a subject that has long past. This chronicles the adventures of a nitwit gladiator/soldier (Will Sasso) through an entire parody of all the historic period action flicks that have happened in the past 10 years – GLADIATOR, 300, TROY and more. Spoof films worked for a time – SCARY MOVIE was one of the more successful ones and obviously AIRPLANE (which wasn’t so much a spoof as it was just slapstick) – but they have gone downhill fast from there with virtually any film genre getting the treatment all with the same obligatory gay jokes, women bashing, idiots and freakshows. I’d Netflix it at best. 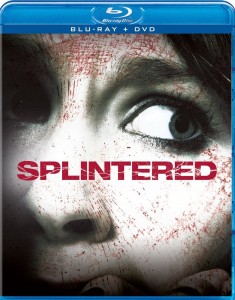 SPLINTERED – Not all of the horror flicks coming from overseas are winners. Take SPLINTERED for example. The British import muddles its way through a tale of a creature that lives in the forest killing those that dare enter or seek it out. This creature – just some dude with sharp teeth – lives with a slew of other people that don’t seem to be as feral and possibly were the victims of some experiment gone wrong. When a teen drags her buddies into the woods to seek out the legend, yep, you guessed it. Sharp teethed British dude gets them. It has some interesting scenery and some of the ideas are not bad but it just isn’t put together that well.

Article Source: Assignment X
Article:Blu-ray and DVD Picks of the Week Including THE GIRL WITH THE DRAGON TATTOO