Home » TV Review: FRINGE – Season 4 – “Everything In Its Right Place”

TV Review: FRINGE – Season 4 – “Everything In Its Right Place” 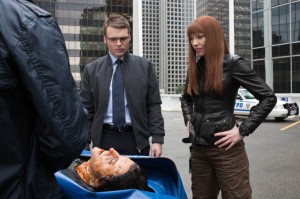 After last week’s monster-of-the week storytelling detour with the sluggish “Nothing As It Seems,” FRINGE returns to the backbone of its storytelling greatness with the excellent Lincoln (Seth Gabel) episode “Everything In Its Right Place.”

After feeling shafted by Olivia (Anna Torv) forgetting any of the advances they made in their relationship, Lincoln feels it’s time he got away to “Over There” by volunteering to work with the alt-Fringe team in trying to figure out what David Robert Jones (Jared Harris) is really up to.

While “Over There”, he is teamed up with Alt. Lincoln (Gabel, again, of course) and Faux-livia (Anna Torv). The two of them are close partners and the work together rather well as a team. There are major differences though with Alt. Lincoln and it’s great to see Gabel play opposite himself. The two determine their paths were very similar, but never quite pinpoint where the point of divergence was that made them so different (namely Alt. Lincoln the confident, hipster narcissist agent and Lincoln the suit-wearing emotions-on-his-sleeve kind of guy).

The story involves a shapeshifter who was part of Duncan’s fold, but left for unknown reasons. He’s been killing people and assuming their identities to stay alive – and to stay close to his boy who was taken by his mother.

This shapeshifter’s story converges with Lincoln’s own feelings of not connecting to his world and connecting to any family. It’s a great parallel – and something FRINGE does well with reflecting the villains oftentimes off its main dilemmas of its core cast.

There’s some nice chemistry between Faux-livia and Lincoln and there are other major revelatory moments including Alt-Broyles (Lance Riddick) being in cahoots with Alt-Nina (Blair Brown) and Duncan.

By the end of the episode (and SPOILER ALERT), Alt. Lincoln is accidentally shot by a Duncan assassin and Nina captured as a result. Alt. Lincoln doesn’t survive and it leaves a hole in Faux-livia. Meanwhile, Lincoln feels he can do more work “Over There” so he sticks around to help her grieve.

The irony of this episode, as much as Lincoln encourages the shapeshifter to move on and find his own “home,” Lincoln is repeating similar mistakes he made in his universe. He was pining for Olivia, and had no chance with her once Peter (Joshua Jackson) returned. Her old memories came back and she forgot the building blocks she and Lincoln made together as a potential couple.

Now, “Over There” he’s taking the place of Alt. Lincoln – with Faux-livia potentially comparing him to Alt-Lincoln and potentially never living up to that potential. It’s great symmetry and a rather touching and affecting episode.

I’ve missed “Over There” and the slight differences with our reality. In our universe, Batman is the Caped Crusader – “Over There” the caped crusader and Dark Knight is M.A.N.T.I.S. Funny stuff.

I also love seeing Torv play a more amped up, loose version of Olivia. Again, it’s so interesting to see an actress as talented as Torv tackle dual roles and manage to make them so different. Same with Gabel – who holds his own opposite himself.

That said, the question of why the two of them diverged from one another, may be evident in why Broyles and Nina have gone to the dark side. My guess and prediction is that Alt-Lincoln did as well. And by doing so, he was the target of the assassination, not the Shapeshifter because he realized what he was doing was wrong.

It’s just a theory, but, I guess we’ll see how all this pans out.

Once again, please Fox, don’t do what you did with last year’s exceptional THE CHICAGO CODE. Don’t take this great drama and kick it off the air while it still provides great writing, stories, performances and direction. Do not renew ALCATRAZ because you think FRINGE fans will flock to it in FRINGE’s absence. It won’t work. That show is D.O.A.

You have a great show with FRINGE on your hands, and leaving it on Friday nights, which is a dead zone anyway, gives you street cred and a show that you can be proud of, even if it isn’t bringing in the numbers it used to.

Deep down, I don’t think this is the end, but then again, when it comes to FRINGE, nothing is what it ever appears to be.