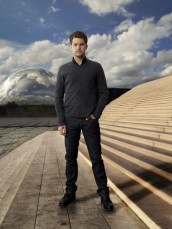 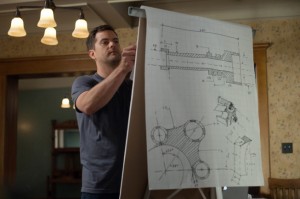 The third season of Fox’s science-fiction series FRINGE ended on a cliff-hanger. Our universe and a parallel universe were both eroding due to a recently-discovered phenomenon that had been caused decades ago. The source of the problem was a breach created by Dr. Walter Bishop (John Noble) who, when his son died in this world, brought his parallel-universe son Peter over to this world to save him – and then kept him. The now-adult Peter Bishop, played by Joshua Jackson, put himself into a machine to mend both universes. It worked – but Peter blinked out of existence, and no one in either universe remembers him.

Then, when FRINGE’s fourth season premiered, Walter began seeing and hearing a mysterious man calling to him for help. A few episodes later, Peter arrived in our universe. He remembers everyone, though they don’t remember him. By now, Walter, our world’s (and Peter’s lover) Olivia (Anna Torv) and Fringe Division leader Broyles (Lance Reddick) still don’t remember Peter, but they believe him and are willing to try to get him back to “his” universe, but they still don’t know what he’s doing in this one. The show took its winter break on a note of suspense and returns Friday nights at 9 PM this week.

Jackson is heading out of the party thrown for the Television Critics Association by Fox, but he takes a minute to answer a few questions.

ASSIGNMENT X: Were you worried that Peter might not come back after he vanished from existence at the end of Season Three?

JOSHUA JACKSON: I was aware that Peter was coming back. No. Actually, I had a little hand in nudging the script in that direction, so I was fairly confident that I wasn’t getting fired.

AX: Were you relieved or just gratified when FRINGE was picked up for a fourth season?

JACKSON: Well, actually, at that point, we already had the pick-up, so we knew probably about a month and a half before the show finished that we were going to get picked up. So it took that pressure off at the end of the year.

AX: Have you done any work during the hiatus?

JACKSON: Yeah, I made a movie called LAY THE FAVORITE, which is actually premiering in Sundance in a couple of weeks.

AX: Is it hard or easy coming back to Peter after doing something else in the middle?

JACKSON: You know, the longer you play a character, the more it becomes like a well-tailored suit.

AX: And are you following all of the multi-universes at this point, or do you get confused?

JACKSON: We have a cheat sheet that we keep pretty close to set at all times, but there are a lot of circular conversations on set as well.

JACKSON: Tune in on Friday.

Click On Link:TV Review – FRINGE – Season 4 premiere – “And Those We Left Behind”