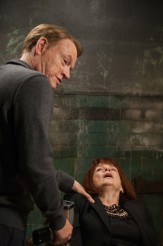 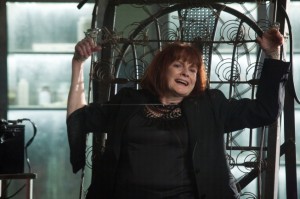 It’s been weeks of build up, but finally the big Olivia (Anna Torv) arc has  been blown open in this week’s FRINGE – “The End of All Things.”

With a title like that, you’d expect this to be the series finale episode, but it’s rather a new beginning for where the rest of Season 4 is heading.

Last week, Olivia was kidnapped after it had been discovered Cortexiphan had been unknowingly injected into her most of the season. It had also been stolen from Massive Dynamics and the only one authorized to access the drug was Nina (Blair Brown).

Now, Peter (Joshua Jackson) races against the clock to find Olivia before her abductors do her more harm. Those abductors include Over Here/Over There jumper David Robert Jones (played by the deliciously evil Jared Harris) and the Over There counterpart to Nina.

What they want is for Olivia to reach her maximum psychic potential under the Cortexiphan influence.

Meanwhile, the debate about whether Peter is influencing Olivia still proves to be a big question mark. Is this Peter’s home or a different home – or both?

The Observer September (Michael Cerveris) also reappears. He’s been instrumental in interfering (or is it setting things right) with the whole Peter-being-saved thing from Day One. He’s been shot, and shows up for help from Walter (John Noble) and Peter.

With September dying, Peter wants to meld with his mind and find out where Olivia is – and of course get some of those big answers to the universe. Ultimately, it’s all about the love between Peter and Olivia – and if that can be set right, all will be right with the future universe.

“The End of All Things” is very big and opens up major plot threads that will be intensifying throughout the remainder of the season (sadly, we’ll have to wait four more weeks until we get another taste).

For casual fans, the episode will be frustrating because you have to know what’s been going on the last four years to truly get sucked into the complex storyline. However, for those die-hard fans, this is an invigorating episode filled with many surprises, some answers and of course many more questions.

It’s a bit nerve-wracking to think the show hasn’t been officially renewed or cancelled yet, which could interfere with a proper season finale/send-off. However, I’m willing to bet, for syndication purposes alone, a fifth and final season will likely be worked out. The FRINGE story is way too big and the quality of the series still so well-done that to give it an early grave would be a disservice to the fans, but also to Fox which has had a steady Friday utility player for the last two seasons.

It’s a nail-biter, but even if this is the  beginning of the end of the series, with the seeds planted in “The End Of All Things” it’s going to one helluva of a ride to the finish line.