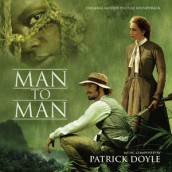 Patrick Doyle gets wild in the jungle before APES came calling

Patrick Doyle’s longtime association with French filmmaker Regis Wargnier on such sometimes exotic, history-based epics as INDOCHINE and EAST-WEST has brought out many of the composer’s most impressively lush works. Traveling to Africa to bring two pygmy tribespeople back to “civilized” Scotland results in a culture clash of symphonic nobility and age-old ethnic percussion for this 2005 score. But more than some soundtrack relic, the soaring MAN TO MAN serves as a hugely impressive warm-up to Doyle’s far-more violent musical conflict between barbaric civilization and those it torments in RISE OF THE PLANET OF THE APES.

Doyle’s talent for hearing the regal voice of esteemed historical subjects, while also capturing the poetic heart of those far below society’s ivory towers, comes remarkably into play here. It’s given especially poignant voice in the two mute pygmy prisoners who are shanghaied by well-meaning scientists for study in Doyle’s homeland (no doubt adding personal affinity to his approach). There’s much classically-influenced passion to be had here, a vital, yet somewhat tragic sensibility that compares very well to John Scott’s Elgar-esque approach for the similarly-themed GREYSTOKE.

Doyle succeeds in continuing that orchestrally noble tradition of hearing seeming savages in a strange, dinner-suited land of anthropologists and gawkers, at first using strings and African percussion to reflecting the jungle through the white man’s musically cultured eyes. Then, that self-same melodic gaze is turned to reveal the explorers’ hallowed institutions as the far more animalistic place for all of its melodic niceties. Yet in the end of the exceptionally stirring MAN TO MAN, there’s a beautiful sense of understanding at work, as both scientist and tribesman meet at the same musical level for a triumphant climax. It’s a place far from Caesar’s view of his human captors, but still very much a piece of Doyle’s musical evolution to that point.

While Patrick Doyle’s done an excellent job of re-inventing his old-school orchestral voice for the percussive action demands of Hollywood with such recent scores as APES and THOR, MAN TO MAN offers the fans who got hooked on Doyle with the likes of HENRY V and DEAD AGAIN a blast of the hugely melodic stuff that first got their, and the studios’ attention. Even within the smaller confines of this movie that has yet to get released over here for some reason, MAN TO MAN offers old-school Doyle at his finest with a soundtrack that’s full of swooning strings and blasting symphonic bombast, all in a romantic key. The subject might be Africa, but the composer’s longtime admirers will find Movie Score Media’s discovery of MAN TO MAN to be pure Doyle delight.