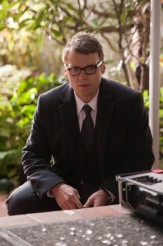 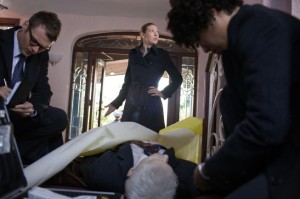 FRINGE can get strange, but with “Wallflower,” the series’ season four midseason finale, it gets downright perplexing.

It isn’t because it’s bad, but because it ends up telling a rather strange, almost tragic story that dovetails into a major mythology turning point, rather than any big reveal of the week’s mystery.

The story begins with an invisible man running around creating havoc and leaving his victims completely white – as if they died from fright.

What we learn though, is this man has a strange affliction and is using the pigment from his victims so he can be seen (he has a crush on a girl in his apartment building).

Not surprisingly Massive Dynamic experimented on this person when he was a boy, but he disappeared, so to speak, after a lab accident.

The pay-off is actually rather sweet – and wholly unexpected. It’s rare for a show like this to not have a huge pay-off after a big build-up, but I really liked how it was handled.

What’s really important though is Olivia and the headaches she’s been experiencing. She too was experimented on when she was little in this timeline, but, Massive Dynamic have been doing more than keeping tabs on her once we get to the episode’s surprise conclusion.

Not much happens with Peter (Joshua Jackson), except that he’s trying to find a way to get back to timeline that he existed in and Walter (John Noble) is practically non-existent as well.

The previews for what comes up after the break is quite exciting. The first part of Season 4 has been all over the place – especially in getting adjusted to the new dynamics of the characters. I’m excited to see what happens with Peter when he travels “Over There”  when the series resumes in January.

In a perfect world, FRINGE would be an X-FILES kind of hit, but it’s not. Maybe it’s too intelligent or perhaps it’s too weird, but many people don’t know what they’re missing. Perhaps that’s what keeps the series so strong  – it has the freedom to be what it is, as opposed to treading a very safe line as to not alienate a mass audience. I’ll take the intelligent an thoughtful story any day – but that alone won’t guarantee a Season 5 if the ratings don’t start picking up pretty soon.

Click On Link:TV Review – FRINGE – Season 4 premiere – “And Those We Left Behind”