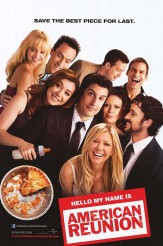 Sort of like a high school reunion, friendly but more nostalgic than actively outrageous

Shortly after it was released in 1999, AMERICAN PIE was hailed as revitalizing the American R-rated teen sex comedy genre. Actually, few others got the recipe quite right, but the film brought forth two highly likable and funny sequels, 2001’s AMERICAN PIE 2 and 2003’s AMERICAN WEDDING, with most of the same characters moving forward with their lives yet remaining similarly highly-sexed and clumsy. There are also four AMERICAN PIE made-for-video titles, unseen by this reviewer.

In screen time as in real time, it’s been ten years since incredibly klutzy, good-hearted Jim (Jason Biggs) married equally good-hearted and even more sex-loving Michelle (Alyson Hannigan). It’s been thirteen years since they and their friends all graduated from East Great Falls High. Because they’re all bad planners, the big high school reunion back in the hometown is the thirteenth anniversary of the graduation. Big questions include whether new parenthood will permanently ruin Jim and Michelle’s alone time, whether the obnoxious Stifler (Seann William Scott) will be accepted by the old gang, whether happily married Kevin (Thomas Ian Nicholas) will succumb to his feelings for old flame Vicky (Tara Reid), whether minor celebrity Oz (Chris Klein) and physician Heather (Mena Suvari) will stick with their inappropriate significant others or get together and whether mysterious intellectual Finch (Eddie Kaye Thomas) will resurface at all. There is also the matter of Kara (Ali Kobrin), Jim’s one-time babysitting charge, now eighteen and still harboring a crush, and Jim’s now-widowed but still advice-dispensing Dad (Eugene Levy).

If this sounds more like a standard romantic comedy than an outrageous raunchy laugh fest, that’s because it is. Sure, AMERICAN REUNION has some moments – one huge gross-out courtesy of Stifler and a variety of sexual events and their aftermaths – but the movie seems like it doesn’t know exactly how much it wants to emulate its predecessors and how much it wants to underscore the notion that all of these people are getting older and a little less prone to taking things to extremes. The exception to this is Stifler, but there are so many other, tamer elements here that the overall effect is less hilarity than mild amusement.

A sequence at a lake goes on so long that we expect either a dance-a-thon (a la a Sixties beach flick) or a piranha feeding frenzy to break out. Instead, it is one of the film’s several instances of an inordinately long build-up to a payoff that would have benefited from a quicker prelude.

Biggs is as proficient as ever as being awkward, Hannigan (between this and her gig on HOW I MET YOUR MOTHER) has the loving sexual enthusiast character down to a science and Scott is fearlessly dopey. Levy as Jim’s largely clueless but ever-supportive father has superb timing and delivery.

We like these characters, they like each other and they still have a couple of good jokes left in them. Mostly, though, they hang around being pleasant but indistinct. Whether they’re worth the ticket and the REUNION trip depends mainly on one’s level of love for the earlier AMERICAN PIE pieces.

Exclusive Interview: Alyson Hannigan on HOW I MET YOUR MOTHER and AMERICAN REUNION