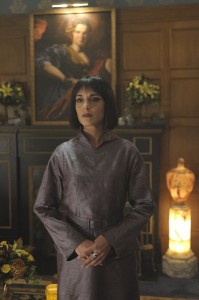 It’s not exactly a surprise that our vampire Aidan (Sam Witwer), ghost Sally (Meaghan Rath) and especially vampire Josh (Sam Huntington) make some bad decisions on BEING HUMAN – the Syfy version. They’re not alone – werewolves Nora (Kristen Hager) and Ray (Andreas Apergis) and especially vampire leader Mother (Deena Aziz) are all in there, too. However, having them all make ill-advised choices all at the same time in the season finale “It’s My Party and I’ll Die If I Want To” as it ups the irritation factor more than it aids suspense.

Josh, guilt-ridden over the car-accident death of his lover Julia, comes to the hospital to find ex Nora there – she lost control and fell down the stairs while partially transforming during the eclipse. When Josh overflows with guilt over Nora being a werewolf, Nora tells Josh that she wasn’t giving him the whole story when she told him he could end his own lycanthropy by killing Ray, the werewolf who bit him. If Josh kills Ray, it will also cure any werewolves Josh made, including Nora. Nora reiterates how relieved she is that Josh didn’t kill Ray, but of course, Josh decides if it will cure Nora, he’ll kill Ray after all.

Suren (Dichen Lachman) meets up with Aidan one last time to explain that she’s gone back to Mother to save Aidan’s life. When Aidan hears Josh’s plan, Aidan decides he’s going to free Suren by killing Mother. Aidan tells Josh to lure Ray to the shed in the woods, where Aidan will help out in some fashion (we never do find out what Aidan has in mind). Sally possesses Ray’s wife in order to help Josh lure his werewolf maker out to the woods.

Sally goes back to the hospital, where she encounters the ghost of her mom (Rahnuma Panthaki). Sally wants her mother to shred her so she can get to limbo to try to help the ghosts she sent there, but Sally’s mom doesn’t want to harm her daughter. Then Sally encounters Nora. Sally bemoans the fact that whenever she helps anyone, like Josh, it’s a mistake. Nora wants to know what Sally did to help Josh. The upshot of this is that Nora gets to the woods by the shed right when Josh is about to shoot Ray, despite Ray’s pointing out that he, Ray, really is a better man these days, with a wife who knows what he is and a son who loves him. Nora’s arrival distracts Josh, Ray gets the drop on Josh, Nora gets the drop on Ray, Josh urges Nora to shoot him (Josh) to end her own curse and there’s a blackout where we hear both Nora’s handgun and the rifle that Ray is presently holding.

Back at the house, Sally sees both her mother and Reaper Scott (Dusan Dukic). Sally’s mother’s door appears. Sally winds up shredding herself in order to get to limbo and so her mother will take her door. This does get rid of Reaper Scott. 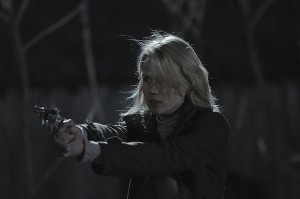 In flashbacks, we learn that Suren truly is Mother’s biological child and that Mother buried Suren for eighty years not to punish her, but to make her strong. Aidan’s plan fails miserably – he was counting on his progeny Henry (Kyle Schmid) to take out Mother’s guards, but Henry has the crap beaten out of him before Aidan ever arrives. Aidan is beaten and taken to Mother and Suren, who are with the vampire royalty and leaders. Mother says she’ll cede all power to Suren – if Suren stakes Aidan to prove she is above such mundane things as love affairs. When Suren can’t do it, Mother embraces Suren, and then stakes her. Aidan is buried unalive, but he says Mother’s fate – knowing that she killed the only woman who ever will love her – is worse.

In the empty house shared by the roommates, Sally’s voice activates the radio. She asks the absent Josh for help, saying she thinks she made a mistake.

Really, Sally? You think it maybe wasn’t a good idea to go into limbo without telling either of your roommates where you were going or what you were hoping to achieve? Let alone maybe checking where they were? If you weren’t going to take your mother’s door, shredding yourself could have waited.

But this is far from the worst decision made in the episode. Why on Earth does Sally help Josh with his quest to become a murderer? An even bigger question is why Nora tells Josh how he can cure her, and then is shocked when he actually attempts to do it. There is something so self-righteous about Josh that it gets in the way of our empathizing with his desperation in confronting Ray. By now, the show has developed a probably unintentional sympathy deficit in this department. With so many other werewolf characters finding ways to coexist with their conditions, we aren’t rooting for Josh to be cured. For one thing, it would end the show and for another, most of his misery with the situation is self-made. Just lock yourself up once a month, be honest with the people around you and you’ll be fine. But instead, Josh goes off to attempt murder, potentially leaving a widow, an orphaned boy and a guilt-stricken Nora. This isn’t somebody being driven over the edge by sudden circumstances, this is a character who is terminally inconsiderate even when he thinks he’s acting in the best interests of others.

Aidan can perhaps be forgiven for thinking Mother wouldn’t harm Suren, the only flesh-and-blood tie she’s got. However, having Henry – who hasn’t always proved the greatest asset – be the key to Aidan’s plan is a poor move, and Aidan almost certainly could have foreseen Mother trying to force Suren to kill him.

It’s a shame to lose Lachman’s elegant Suren, and Witwer is likable in Aidan’s ardor and despair. As there will be a Season 3, we can guess that Josh will survive but still be wolfy. How Sally will return to this plane and how Aidan will get back above ground are worthy mysteries that justify tuning in again when BEING HUMAN comes back, but the whole enterprise would be more appealing if things could happen despite the characters’ best efforts, rather than because of their less-inspired ones.