The show is back with another missed opportunity of an episode 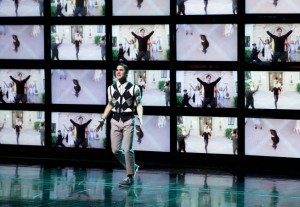 The strange thing about GLEE is that if you eliminated half the episodes in a given season, you would have a pretty great show. Often times it feels like every other episode is on target, and that couldn’t be more true as GLEE returns from a nearly two month hiatus with “Big Brother.”

The February cliffhanger “On My Way” was a very powerful and well-thought out episode handling both bullying and the dangers of texting and driving. The texting moment came to a dramatic whopper when Quinn (Dianna Agron), while texting and driving, gets in a horrible car crash.

You would think the aftermath of this would play out in a similarly strong fashion in “Big Brother,” but it sadly doesn’t. In many ways, the aftermath is an afterthought as Quinn, yes, is confined to a wheelchair. Her doctor says with rehabilitation, she’ll heel , and she makes the big statement that by the time Nationals comes around, she’s going to be dancing on stage. Let’s hope if they do make this happen, it doesn’t end up being a hokey, forced moment.

Quinn is still Quinn — bitchy, a little self-absorbed and frankly, it would have been more powerful if she did die. The writers have no idea what to do with her, and she gets all these terrible storylines. Here’s how imagine a writer’s room session going: “I got it, what if one of the characters turned into a tree!” “Hey, that’s brilliant, let’s give Quinn that storyline.”

I like Agron as an actress, but it’s sad how many terrible story arc she’s been given. Giving her this subplot could potentially bring attention to texting with driving and it gives Artie (Kevin McHale) a wheelchair buddy, but there is something  a bit redundant about this storyline too. We already have one Glee club member in a wheelchair. Isn’t it a bit convenient to now have two. I get the point, but it feels sloppy and too easy.

That said, the best stuff in this episode is the relationship Quinn strikes up with Artie – and how Artie shows her how to be handi-capable. As contrived as this storyline could ultimately be, at least the scenes they’re writing between Artie and Quinn are top notch — even if the intent feels forced.

The rest of the episode is pretty painful to watch. Blaine (Darren Criss) is visited by his older brother Cooper Anderson (Matt Bomer) who has become a bit of a TV commercial sensation and gives the kids some really bad advice on how to make it in the business. It’s a one-note joke that has Blaine seething. He feels his brother has always hogged the spotlight and never gives him enough credit. All of their scenes together are way too melodramatic, though the climactic musical number between Blaine and Cooper as they sing the Gotye song “Somebody That I Used To Know” is pretty powerful.

Also floating around the episode is Finn (Cory Monteith) realizing that he’s living Rachel’s (Lea Michele) dream and not “theirs.” And Sue (Jane Lynch) has the potential of co-coaching the Cheerios unless she can make the Glee club win at Nationals. Sue also discovers there’s something slightly wrong with her baby, though what, is still to be determined (her baby is a girl, by the way).

To top things off, there’s even a shameless Six Flags plug where the kids go to an amusement park and ride roller coasters.

Could an episode be any more chaotic?

I guess, after “On My Way,” I was expecting something a little more focused, a little more grounded. I also didn’t like how they jumped ahead in the time line with Quinn. Sure, it would have been heavy if they picked up right after the fact, but come on, if you’re going to have her get into a horrible car crash to begin with, show the real deal and make it count. She doesn’t even have a scratch on her this episode.

Eric Stoltz is proving to be a solid director for GLEE – he knows how to take even the weakest scripts and milk them. Plus, he’s becoming quite exceptional when it comes to the musical numbers. His staging on the “Somebody I Used To Know” is fantastic and elevates the emotional level in ways the dialogue earlier in the episode never could.

That said, “Big Brother” is really just another filler episode with another vcool guest star (Bomer) forced to be hammy and over-the-top — not to mention taking time and space away from the core cast. Bomer’s funny, but he’s painted in a one-note light.

Again, like so much about GLEE, there is tons of potential, but yet again it’s squandered with uneven storytelling and a lack of understanding of who or what GLEE really wants to be anymore.