Home » being human review it's a shame about ray

The season gets off to an intriguing and warm start 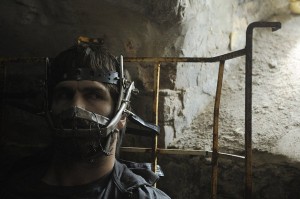 We shall begin this review with something that is both a rant and an apology. Season 2 saw the U.S. BEING HUMAN gang often making bad decisions, ignoring each other and generally being annoying. With “It’s a Shame About Ray,” Season 3 gets off to a start that suggests the creative team has realized that the show is best when the characters like each other, are shown to care about each other and get over themselves enough to be productive. The upshot is that we get a tiny bit of a reset that allows us and them to take a breath and start in a place that is more sympathetic, if less physically and metaphysically comfortable.

There’s also the matter of the U.K.BEING HUMAN. Season 1 of the U.S. edition felt like a less energetic copy of its progenitor. Season 2 of the U.S. BEING HUMAN began to go its own way. Season 4 of the U.K. BEING HUMAN was so deeply annoying (in this reviewer’s opinion) that it’s cause for thanks that the American version shows no signs of going down that road.

Within the story, it’s been fifteen months since the events we saw at the end of Season 2. Aidan (Sam Witwer) is hallucinating in the grave where Mother buried him – until he’s dug up by a human mercenary. It seems that a human flu virus has killed a large percentage of the vampire population, and the survivors believe that Aidan’s untainted blood can cure them. Aidan’s old nemesis Atlee (Kyle Gatehouse) turns up, kills the human mercenary and starts to haul Aidan back toPennsylvaniaso the Dutch Elders can feed on him. However, Atlee is infected himself and drains the grave-weakened Aidan. Aidan’s blood doesn’t save Atlee, who disintegrates into dust. Aidan is too dazed to control the truck, which crashes and dumps Aidan out through the windshield onto the roadside.

Sally (Meaghan Rath) is stuck in limbo, trying to help pals Nick (Pat Kiely) and Stevie (Robert Naylor) escape with her by banging on the limbo side of the door to the brownstone. This hasn’t worked, despite hundreds of attempts.

We find out that Nora (Kristen Hager) did shoot and wound Josh’s (Sam Huntington) werewolf sire Ray (Andreas Apergis). Josh finished Ray off by beating him to death with a rock. By killing his sire, Josh has ended his own lycanthropy, but despite what they were told, Nora remains a werewolf. Josh and Nora have spent the whole fifteen months trying to rescue Sally from limbo and trying to locate Aidan.

A witch (Amy Aquino) offers to help Nora and Josh resurrect Sally into her own body, which can be healed by a salve made from the heart of someone Josh kills. Lucky for everybody concerned except Ray, Josh doesn’t have to kill anybody new. He and Nora dig up Ray’s grave and get the heart.

When the spell is worked, the brownstone door opens on the limbo side. Of course, Sally has no idea of what’s actually happening in our world. She insists that Nick and Stevie go through to presumed freedom within the door, then follows them.

When Sally wakes up, her body healed, she says that Nick and Stevie are here with her also. Josh and Nora worry that this means the other spirits have returned to their coffin-bound corpses, but it seems possible that the whole gang is currently inside Sally.

Meanwhile, the witch digs up Ray’s corpse for purposes yet unknown.

After all of the previous season’s separations and self-absorption, it’s a pleasure to see all of the main characters thinking of one another. It’s especially gratifying to see Josh and Nora making best efforts to rescue Aidan and especially Sally, though it seems a little odd that Nora’s leading the charge here (Josh knew them first). Josh, guilt-bearer that he is, of course isn’t enjoying being human again, as he seems much more miserable than Nora is herself about the fact that she’s still a werewolf.

As for Sally, she’s blossomed into a heroine. She wants to get home, but she also wants to save her fellow ghost friends, who appreciate what Sally is attempting to do for them.

As for poor Aidan, he’s aware that he messed up with Josh and Sally, but he goes through so much suffering through the episode that we can hardly blame him for any lack of action, since he does a great job of simply hanging in there and surviving.

Special mention should be made of guest Aquino, who is delightfully and humorously down to earth as the practical, morally ambiguous magic worker.

It turns out we’ve missed these people. Welcome back, BEING HUMAN.