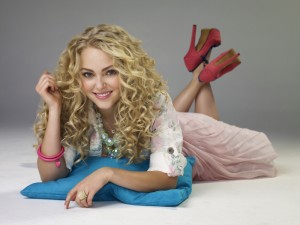 AnnaSophia Robb in THE CARRIE DIARIES | ©2012 The CW/Nino Munoz

As a fan of SEX AND THE CITY no one could be more excited to see a new extraction from that series, until well, I actually did see that painful extraction. THE CARRIE DIARIES has no semblance to SEX and the characters are as abstract as they come. The show is a prequel and takes place in 1984 during the beginning of Carrie Bradshaw’s (AnnaSophia Robb) junior year of high school. She just lost her mother three months ago and her 14-year-old sister (Stefania Owen) is going grunge and smoking pot. Their father (Matthew Letscher) is MIA, mindlessly going through the steps of life whilst avoiding anything that forces him to admit his wife is gone for good.

Robb narrates ala Sarah Jessica Parker and that may be the only authentic connection to SEX. The show depends heavily on shoving ’80s fashion, hair, and heavily caked on colorful make-up in our faces in hopes of transporting us back in time. Oh and we can’t forget the music, one of the best things about the ’80s, no doubt, and one of the best things about CARRIE, never mind that the lingo just isn’t there in the dialogue. It’s as if the creators thought if everything looks and sounds right they wont have to pay much attention to the script.

CARRIE tries way too hard to be hip and sheik. It’s the difference between actually being something and just looking like it. Ideally, yes, the exterior looks good, internally the show lacks heart, authenticity and depth. A 16-year-old who gets an internship in New York City and begins a whole new life for herself while still attending high school? Her father thinks this will help her transition through the loss of her mother?

Now, granted, I get it makes for better TV if we can have Carrie in New York, the city she is most attributed to, however, this is pushing it. I mean if the producers are that much in a hurry to have her in New York then send her there as a young adult. You can’t have it both ways, either she is beginning a new life in New York or she is still a teen back in Connecticut. The show’s artificiality from premise to plot takes us far away from the SEX we all know. What made SEX special is sorely lacking here big time. We believed in the characters. We could relate to them. We knew them. We lived through similar things in some of the very same ways Miranda, Charlotte, Samantha and Carrie did. CARRIE feels synthetic from the minute we see the Bradshaw sisters flailing around in a so-called fight over a purse to the episodes end where Carrie begins her love affair with the mighty word and starts a journal.

Robb is in over her head in trying to make Carrie a plausible, likeable yet imperfect soul.  She lacks the naturalness Parker inhibited in Carrie and Robb flounders when pivotal moments are thrust her way. She is miscast as the lead as are most of the cast, sans Brendan Dooling, Carrie’s yet to come out best friend who happens to be dating another close friend of hers. Dooling is the only thing that seems real here and his subtlety and charm can be seen throughout this muck which makes Dooling even more impressive.

It says a lot when with death, virginity, lawyers, New York, romance, drugs, high school and coming out are all crammed into a pilot of a show and yet the show itself couldn’t be more boring or dull because none of it rings true.

Article:AnnaSophia Robb gives the scoop on THE CARRIE DIARIES