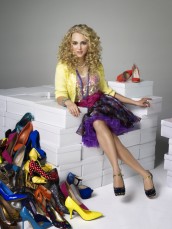 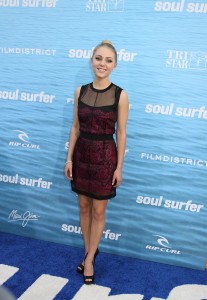 SEX IN THE CITY was a huge cultural phenomenon and a major break-out success for HBO. Now, the prequel THE CARRIE DIARIES is landing at The CW this winter based on the Candace Bushnell book and focusing on Carrie Bradshaw’s high school years.

AnnaSophia Robb plays the iconographic Carrie, and she was well of the big high heels she had to fill.

“When I landed the role, I remember having a conversation with [showrunner] Amy [B. Harris who said] ‘we don’t want you to emulate Sarah Jessica Parker’s performance,” says Robb. “I loved the show SEX IN THE CITY. I try to watch an episode every night, so my character is a combination of the books, the script, what I’m bringing to the role and Amy’s vision for the character. I realize as we go on, I feel like I’m becoming more like Carrie or Carrie is becoming more like me.”

In another great moment for Robb, when she landed the role in THE CARRIE DIARIES, Sarah Jessica Parker  sent her a message that made taking over the role alright for her.

“When I landed the role, she sent me a wonderful note and gave me her blessing,” says Robb. “That was cute for me. I was obviously nervous, but it meant a lot to be able to have her blessing, so I sent a thank you note back.”