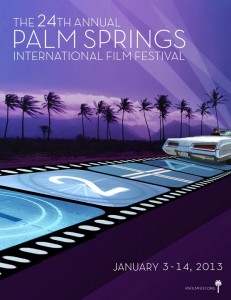 Most film festivals like to wrap things up with a kind of ‘best of the fest’ summation. But what if a festival was the best of not just one fest but of many fests? Then they would be the Palm Springs International Film Festival.

So look at it this way: Palm Springs boasts the creme de le creme of the festivals that came before them. Meaning you get the films that wowed them in Cannes (AMOUR and THE HUNT), a hit from Berlin (ROYAL AFFAIR), an award winner from London (RUST AND BONE), critical faces from AFI (A HIGHJACKING and THE SAPPHIRES), and even a high profile Hollywood hit that is up for numerous awards (THE IMPOSSIBLE). Toss in some popular foreign films from Spain (BLANCANIEVES), France (THE INTOUCHABLES), and Germany (BARBARA) and you get the world picture. 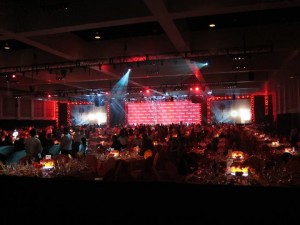 And best of all? Your film feast is served with the laid back style that Palm Springs is famous for the world over. None of the rush about or weather concerns of Sundance. None of the sold out crushes of Toronto. None of the sheer gridlock of the LA Film Festival.

It didn’t hit me until my second day there. Something seemed quietly amiss and then I heard it. Or rather, lack of it. I hadn’t heard a car horn or voice raised in anger, not once. And strangest of all, free parking everywhere. (Anyone who’s ever rented a car at Sundance and then found nowhere to park it would be in heaven).

The crowds? Super laid back and not just because the majority of festival goers are of retirement age. The whole city vibe is soft talk, smiles and erasability. Even the screenings that were considered sold out usually found a way to get everyone interested into the theater. And this at a festival that boasts having the 2nd highest audience attendance in America. Call it the cinema oasis in the desert.

And no respectable film festival is without its Left Field programming. Palm Springs’ best one was the “How to Read a Film” special program series, that among other gems, paired Stanley Kubrick’s THE SHINING with the new SHINING conspiracy documentary ROOM 237. Between the two screenings audiences adjured to Jiao, a local restaurant/bar for a “Redrum-themed” informal eat, drink and debate.

Being that the Palm Springs is but a few hours from LA and long been considered a playground to the stars, a celebrity packed awards night was the glitz highlight of the ten days.

Among the honored at the Black Tie Awards Gala: 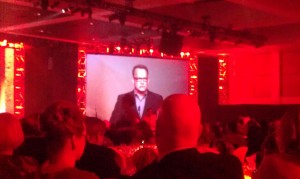 Bradley Cooper received the Desert Palm Achievement Award, which was presented by his SILVER LININGS PLAYBOOK‘ director David O. Russell. Russell spoke about how he was inspired to do the film by his son’s own struggles with bi-polar issues and when Cooper took the stage he seemed genuinely honored and visually shaken.

Richard Gere was presented with the Chairman’s Award by his frequent co-star Diane Lane (COTTON CLUB, UNFAITHFUL) and the duo acted more like ex-wife and ex-husband than cinema collaborators. One wiseass at my table did a countdown until Gere started talking about Tibet and the Dalai Lama. He didn’t have to wait long.

Sally Field met her Career Achievement Award with a  handful of speech notes. The general consensus was she gave a brilliant one page acceptance speech that spanned her entire acting that included her playing Gidget in the 1960s, winning two Best Actress Oscars in the ’70s and ’80s (NORMAN RAE and PLACES IN THE HEART), and most recently, acclaim for her supporting role in LINCOLN. Unfortunately it went on for four pages.

If the evening would have had an award for best presenter it would have gone to Tom Hanks who was there to honor director Robert Zemeckis as Director of the Year. Hanks spoke of their work together (FORREST GUMP and CASTAWAY), and how as a child Zemeckis was inspired to become a director after watching Jerry Lewis on TV talk about the invention of a film school. Zemeckis wisely kept his thank your short saying trying to follow Hanks was impossible. 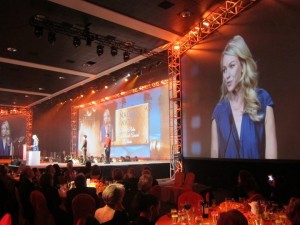 And speaking of impossible, THE IMPOSSIBLE star Naomi Watts delivered a modest and passionate acceptance speech when she received the Desert Palm Achievement Award — Actress. With fond memories of her time growing up in Britain and Australia, she marveled at her own luck in America.

The class act award of the evening (if there had been one) should have gone to Helen Mirren who took home the International Star of the Year statue. Not only did she keep it brief, funny, and self-effacing, she refused to plug her films and pleaded with the audience to please watch films with subtitles. Then she told a joke and exited the stage.

ARGO‘s Ben Affleck, Alan Arkin, John Goodman and Bryan Cranston were all on hand for this year’s Ensemble Performance Award. As the last award of the evening several tables had already made for the exits but they missed a verbal treat, Cranston and Arkin spoke like they were on fire.