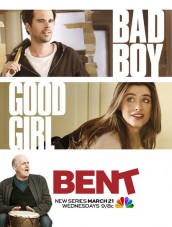 NBC has a really great comedy series on its hands. Too bad no one will see it as it’s six episodes are being burned off over the course of the next three weeks. 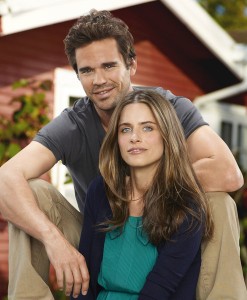 As much trouble as NBC has been in this season with ratings, the quality of its programs have actually been quite interesting – even when they do seriously fail in nabbing viewers.

And while we’ve had to suffer through the abysmal WHITNEY and ARE YOU THERE CHELSEA?, they also hit a double with UP ALL NIGHT and I would even say a triple with the surprisingly well done quirky comedy BENT.

If you can forgive the atrocious title, BENT is a refreshingly well-made, breezy romantic comedy staring David Walton as a quasi-sleazy contractor Pete Riggins. He’s hired by the uptight Alex Meyers (Amanda Peet) to remodel her kitchen, but opposites attract and they’re immediately drawn to each other.

The first and second episodes play up their love/hate relationship quite well, and the series hits the ground running with its “Pilot” episode establishing the quirky supporting cast and propping up a premise that is more like the underrated early 2000’s series ED more than anything else on any other big network.

It’s a character comedy enhanced by witty banter and a thoroughly likable cast. In some ways, this is an hour-long dramedy, not a half-hour comedy, and maybe that’s why NBC has decided to pare up back-to-back episodes over a three week period (only six episodes have been made).

Stand-outs on the series also include Jeffrey Tambor as Pete’s struggling actor/ladies man dad James. Tambor is a hilarious and brings a nice spit and polish to the proceedings.

The chemistry between Pete and Walton is quite good too. They have instant chemistry, which is a hard thing to do – plus their dialogue ain’t too shabby either.

Not very much promotion has went into BENT, which is never a good sign. However, if NBC really knew what it had, it would be doing a little more leg work to get people to sample it. This is the type of quirky originally comedy we frankly need more of. Sadly though, it’s also the type of comedy that rarely survives the harsh realities of the easy sell of network television.

It’s not a good sign that these episodes are also getting burned off in this fashion, but maybe a nice little niche will form for them, so NBC can potentially bring it back for a second season. It’s highly doubtful, but you can always wish.