As the fourth season finale airs tonight, the actor talks about reprising his role of William Bell once again 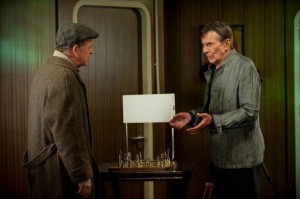 While Leonard Nimoy will forever be tied to his role of Spock in the seminal STAR TREK franchise, the actor has managed to eke out a whole new fanbase with his on again/off again portrayal of genius William Bell on the Fox sci-fi series FRINGE.

As the series enters its fourth season finale tonight, Nimoy makes a return appearance as Bell whose desire to destroy both universes on the series to create a new third once has lead the series to this potentially ground-breaking new territory.

“FRINGE is a wildly imaginative show,” says Nimoy while talking about FRINGE to the press yesterday. “The character of William Bell started out to be rather ambivalent. We weren’t quite sure whether we were supposed to enjoy him or be afraid of him. We couldn’t figure out what his motivation was. At the end of last season, he seemed to come around to be less dangerous. This season I think things have taken another turn. He’s in another universe and has taken on other characteristics. There were challenges in the character itself that were attractive to me. I could play aspects of a character that I haven’t played in a long time, so it was very welcoming to me.”

Ironically, Nimoy announced a couple of years ago that he was quitting acting, but of course, now he’s returned. So the big question is — what made him come out of retirement?

“I’m a sucker for a good role and [FRINGE executive producer] J.J. Abrams is a friend of mine,” says Nimoy. “He calls. I take his call. The writers and producers, Joel Wyman and Jeff Pinkner, and the cast – they’re a wonderful bunch of people and I enjoy being there. When they called and asked me if I would do it, it was pretty easy to convince me that there was an interesting challenge in the character and a very wonderful company to work with.”

Nimoy does admit that he was hesitant at first as to what the producers wanted to do since he felt “the mystery of William Bell had gone away by the end of last season because it was pretty clear he was a pretty decent guy.”

So then, Nimoy adds, it was about “where are we going to go now?”

“It was explained to me that we’re opening up a whole world and whole new can of peas, so to speak and William Bell is being recreated as something else,” says Nimoy. “That intrigued me and I was excited to go back to work.”

That place, Nimoy reveals is definitely not a rational place as evidenced by the season finale.

“The William Bell character started out to be a very intelligent and rational character,” says Nimoy. “I think he’s still very, very intelligent but I’m not quite so sure he’s rational anymore.  I think you’ll see some behaviors [in the finale] that have taken him quite a distance from where he started.”

With the show committed to a final season next year, the other big question is whether Nimoy has been approached to wrap up the role (that is, of course, he survives the finale tonight).

“I’m sure we will be having conversations about that before too long,” says Nimoy. “I haven’t heard anything new about William Bell or the show, except that it has been picked up for 13 episodes, which I think is wonderful. I know the company was hoping for that so they could have another season to close it out successfully. I haven’t herd anything about Bell coming back, but I’m sure I’ll be getting a call. We’ll talk about it. It will depend on my schedule. It will depend on what they have in mind for the character. There are a lot of issues to be dealt with, but we’ll be talking.”

As for his other famous role – that of Spock – rumors have circulated that he may be reprising his role again in J.J. Abrams STAR TREK 2 – though Nimoy says it isn’t necessary for him to be part of that franchise any more.

“My feeling is they don’t need me – they’ve got a wonderful cast,” says Nimoy. “Zachary Quinto has taken on the character of Spock and I think is wonderfully suited. He is a talented guy and a very intelligent actor and very well trained. They’ve got a great company of people replacing all of us. I don’t think they need me, frankly. It’s flattering to be talked about, but I just don’t think they need me.”

In the end, Nimoy says that both STAR TREK – the TV series and FRINGE have more than a few things in common – most importantly a devoted group of fans.

“STAR TREK did very poorly in the ratings, but eventually, the show started to become more and more popular until it became a news story where stations were carrying the show at various hours and various times and sometimes in marathons on weekends at 6:00 every night in syndication,” says Nimoy. “The same thing could happen with FRINGE. I can tell you that when STAR TREK was put on a Friday night, which is a date night, not a good night for a show like this, it did, very, very poorly. FRINGE has the same kind of audience, a small audience, but very intense and very committed. I think it’s commendable that the people at Fox decided to honor that commitment.”