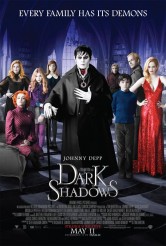 DARK SHADOWS, the supernatural soap opera created by Dan Curtis that ran on ABC from 1966 to 1971 (it also spawned two feature films and a short-lived 1991 TV remake). Part of the show’s charm was that, in its day, there was nothing like it in terms of mixing soap opera romance and jealousy with vampires, werewolves and witches. The other part of its charm (for some) was the show’s never-say-die, one-take-wonder production ethos. If a door wouldn’t close, by golly, an arm would shoot out into the frame and pull it shut; if flies were buzzing around the set and landing on the actors’ faces, they gamely plowed on with their lines.

Doing DARK SHADOWS now presents a formidable challenge for any filmmaker. For one thing, there are now plenty of projects combining vampires, werewolves and witches – everything from BUFFY to BEING HUMAN to TRUE BLOOD to THE VAMPIRE DIARIES to TWILIGHT has a different take on the mixture.

If it needs saying, director Tim Burton isn’t one to rip off other filmmakers – which may be part of the problem here for him and screenwriter Seth Grahame-Smith, working from a story by Grahame-Smith and John August. Jokes and notions that seem new to the filmmakers are staples in fantasy (though not necessarily horror) film and television, so the audience is familiar with most of the humor here.

What elevates DARK SHADOWS – and some of its more oft-seen concepts – is the absolute commitment of leading man Johnny Depp, who does know when he’s ribbing us, but still takes the whole business of being a romantic vampire hero very seriously.

Depp plays Barnabas Collins, a member of the founding family of Collinsport, Maine. When Barnabas is still a young man in the 1700s, he spurns the affections of housemaid Angelique (Eva Green). Unfortunately for Barnabas and everyone around him, Angelique is not only extremely hurt and angry, she’s also a witch. End result – Barnabas’ parents die, his true love Josette (Bella Heathcote) commits suicide and Barnabas is turned into a vampire and buried for two hundred years.

Cut to 1972 and a dig site in Collinsport. A construction crew finds the coffin and opens it – at the cost of their lives. Barnabas then heads back to the family mansion Collinwood, where he meets the remains of his family. Matriarch Elizabeth Collins Stoddard (Michelle Pfeiffer) runs things, while her brother Roger (Jonny Lee Miller) is a wastrel.Elizabeth’s teenaged daughter Carolyn (Chloe Grace Moretz) is a sulky teen, while Roger’s son David (Gully McGrath) is a lonely little boy who sees ghosts. Also in the household are psychiatrist Julia Hoffman (Helena Bonham Carter), a booze-soaked wreck who wishes she looked younger, and governess Victoria Winters (Heathcote again), who bears an uncanny resemblance to Josette. Barnabas, delighted to find he still has family, vows to reverse their fortunes, revealing his true nature to Elizabeth at the same time he shows her a treasure trove in a hidden room. Barnabas also shyly begins courting Victoria. Alas, Angelique is still around, having reinvented herself every few decades so that she can expand her business interests while crushing the Collins’ fishing fleet. Angelique wants Barnabas back, Barnabas doesn’t want Angelique back – well, maybe a little, but not enough to get her over that whole “Hell hath no fury” business.

There are a lot of interwoven elements here – Depp’s Barnabas looks like a combination of Nosferatu and an Edward Gorey drawing, while Burton’s concept of Angelique’s true nature is lyrical and melancholy. There are touches of a haunted mansion tale, a dark fairytale and of course comedy, though not the rib-in-the-guts style suggested by some of the DARK SHADOWS trailers. Depp makes a lot of the gags work because he is so invested in them, but parodies of the Seventies as an era need a lot more point and inspiration than is found here to make them produce laughs. Likewise, there are now so many stories of people from the past winding up in the present that time travel qualifies as a fantasy subgenre – Barnabas arriving in the present is a set-up, but it’s not an ongoing gag that yields as much mileage as the film tries to get out of it.

Then there’s a question of tone. Barnabas is agonized over being a “monster,” but he seems to kill arbitrarily and with no direct remorse. Is this meant to be a darkly comedic aspect of his persona – that he’s only superficially upset about taking life – or do the filmmakers feel like they are giving the issue its due? It’s hard to tell from the end result. Likewise, a fair amount of time is given over to set pieces, like a montage of Barnabas trying out different sleeping places, that don’t advance the plot and have a few too many beats.

Then there’s the issue of romance. We’re a little bit on Angelique’s side here. This is partly because Green gives a wonderfully flexible performance – no tell-tale evil here, this Angelique is the heroine in her own mind – but also because Victoria, after a promising introductory scene, remains underdeveloped. We get back story on her, but we just don’t see enough of her in the present to feel one way or the other about Barnabas’ longing for her.

It seems something of a shame that Robert Cobert’s iconic DARK SHADOWS theme music is never used (a bit of his original work is incorporated into Danny Elfman’s score, but not that). However, it seems fitting that there’s a group cameo by original DARK SHADOWS stars Kathryn Leigh Scott, David Selby, Lara Parker and the late Jonathan Frid.

DARK SHADOWS is an oddity. Neither scary nor campy, it’s another of Burton’s tall tales, full of visual beauty and whimsy, with some unexpected emotional notes, but ultimately more style than substance.