Home » fringe the bullet that saved the world

TV Review: FRINGE – Season 5 – “The Bullet That Saved the World” 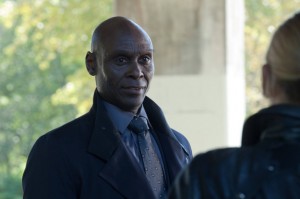 Just when I thought FRINGE was going to get too repetitive with its “let’s find the videotape of the week” storyline as Walter (John Noble) tries to reconstruct the plan to destroy the Observers and save the world, “The Bullet That Saved The World” completely changes everything.

A really solid episode that has a shocking moment toward the end that changes the fifth season of the series moving forward.

The episode digs deeper into the Observers tendency to read minds and their attempt to desperately find the Resistance especially the remaining members of the former Fringe division.

When Walter discovers one of the keys to plan is in a subway that’s protected by the Observers, they start using remnants of former Fringe cases to help them (Walter kept samples of things in a secret basement under the lab).

Everything seems to be going according to plan, except for the big bad evil Observer ends up killing Henrietta (Georgina Haig), the daughter of Olivia (Anna Torv) and Peter (Joshua Jackson).

This is a shocking moment and actually comes way too early in the game, but the resonance is huge. In fact, I think this decision is rather smart, because it distills the Fringe Division back down to the core team. Even Broyles (Lance Reddick) shows up, and he appears to be working for the Observers, but really, he’s part of the Resistance and working undercover (he knows how to block them from hearing his thoughts too).

The “bullet” of the title refers to a bullet necklace Peter gives to Henrietta.

The Observers continue to get creepier with every new episode and the stakes are raised exponentially. It’s great to know there’s a 13-episode arc here, and it’s not going to be interrupted by random standalone episodes. It’s all meat and “The Bullet That Saved the World” is another excellent feather in the series’ cap.