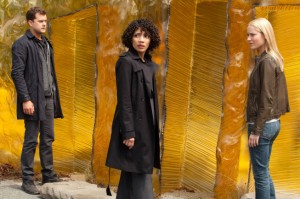 I’ve said it before, I’ll say it again, FRINGE is one of the most ambitious and ground-breaking science-fiction series ever. It never rests on its laurels and it’s always quick to change its tone, focus and concept season by season in an attempt to tell challenging and complex stories even die-hard fans would never expect.

After Season 4, FRINGE was on the bubble and almost didn’t return for a fifth and final season, but Fox gave the series a last minute reprieve. Now the series is spinning off from the one-off “future” episode from last season “Letters of Transit” which took the team to the year 2036 where the Observers have taken over Earth and made that the focus of Season 5. The Fringe team has to save mankind from those bald-headed interlopers.

Peter (Joshua Jackson), Walter (John Noble) and Astrid (Jasika Nicole) have already been freed from a twenty year slumber in amber by Peter’s now grown daughter Henrietta (Georgina Haig). As the Season 5 premiere “Transilience Thought Unifer Model-11” begins, the team is now searching for Olivia (Anna Torv). She too was encased in amber, and after some digging, she’s freed from her slumber as well.

While the big time jump doesn’t exactly explain all that happened, what is clear is Henrietta (or Etta as they like to call her) was taken from Peter and Olivia when she was three – likely by the Observers. Their relationship went on the rocks and then the whole amber thing happened.

Meanwhile, September, the good Observer had used a device called a Transilience Thought Unifer Model-11 to fragment Walter’s brain with information on how to destroy the Observers for good.

FRINGE hits the ground-running with this Season 5 premiere and it’s a doozy. The language, tone and feel of the series has completely changed and that’s part of its charm. With this being the finale year, the series isn’t afraid to be weird and go completely out there. Anyone coming in this late in the game will be completely lost and anyone trying desperately to catch up needs to pay attention. The show never pandered, but now it’s not even pretending to try.

Exciting, fresh and filled with tons of surprises FRINGE is back and better than ever. It’s a science-fiction the way it should be – daring and original. FRINGE may have only lasted five seasons, but it has provided some of the most original television since the heyday of THE X-FILES.