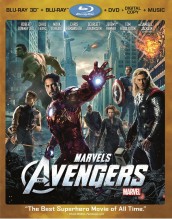 THE AVENGERS Highlights this week in Blu-ray and DVD Releases 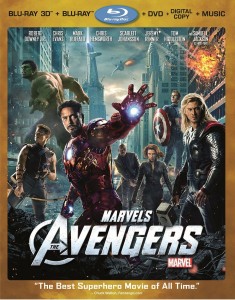 THE AVENGERS – Now, this is how you do a superhero team movie right. While there have been attempts in the past to blend characters together in order to make a blockbuster movie. They could not have done much better than Joss Whedon did with THE AVENGERS – combining the characters/stars of IRON MAN (Robert Downey Jr.), CAPTAIN AMERICA (Chris Evans), THOR (Chris Hemsworth), a new HULK (Mark Ruffalo), Hawkeye (Jeremy Renner) and Black Widow (Scarlett Johansson). Of course, they all come together with the help of Nick Fury (Samuel L. Jackson) and S.H.I.E.L.D. after he had been seen individually contacting them in the other Marvel movies.

The cool thing about it is that while yes Marvel had the general idea about an AVENGERS movie and set the stage with Fury being in all the other films, Whedon brings it together like it was supposed to happen. It is enough to have a geekgasm. Because it is done right. Whedon doesn’t mean for it to be anything more than a blockbuster of action and cheeky lines and all that good stuff that makes comic book movies sometimes eye-rolling affairs. But the advantage is that Whedon is a master of writing dialogue, something that earned him lifelong fans in BUFFY THE VAMPIRE SLAYER, ANGEL and FIREFLY. Superstar lineup of actors and characters? Check. Great action? Check. A villain that is classic on one hand and simply dastardly on the other? Check. Plenty of playful banter and characters you give a sh** about? Check. No wonder it is one of the highest grossing movies of all time. Get the four-disc comb pack that gives you a DVD version, Blu-ray, Blu-ray 3-D and a digital copy. Awesome stuff. 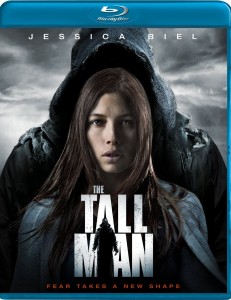 THE TALL MAN – I’m kinda surprised THE TALL MAN hasn’t received as much fanfare as some of the other horror films that have come out recently. But it is actually a pretty good film that keeps you guessing in regard to what’s happening, stringing you along on multiple occasions only to pull you in a completely different direction. That’s a good thing. If one thing that has happened to Hollywood over the last decade is lazy writing and lazy development of storyline. THE TALL MAN has none of that as you really don’t see things going the way they will go until the end. The cool thing about the film is that it plays with our expectations. We assume that there is a bad guy out there stealing kids and just killing them in some remote location and has an entire small town gripped with fear. But the truth is completely something different. At least worth a Netflix watch or checking out on VOD. 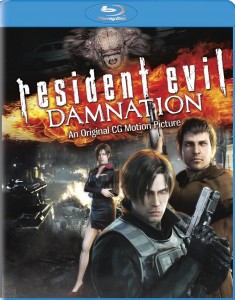 RESIDENT EVIL: DAMNATION – Back in the day, computer animation was a new thing and never came across as very lifelike until FINAL FANTASY: THE SPIRITS WITHIN came out and blew everyone out of the water with just how real animation had become. Things have only improved since then and RESIDENT EVIL: DAMNATION is one of the best looking CG films I have seen in a long time. Of course, this is the sequel to RESIDENT EVIL: DEGENERATION, also playing off the video game aspect of the RESIDENT EVIL series rather than the films starring Milla Jovovich. Here, Leon S. Kennedy (one of the main characters from the video game franchise) travels to a Eastern European country in order to see if bioweapons are being used in a war. What he finds, isn’t pretty and once again the T-Virus is on the loose. It also sets up nicely the upcoming sixth video game that will be released in a few weeks. If you like the games or even the movies, you will enjoy this really good-looking animated film. 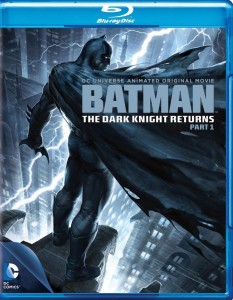 BATMAN: THE DARK KNIGHT RETURNS, PART 1 – Speaking of animated goodness, the long-awaited animated feature chronicling Frank Miller’s landmark graphic novel about a future and bleak caped crusader finally makes its DVD and Blu-ray debut. It has been a decade since Bruce Wayne (voiced by Peter Weller) hung up his cape and followed most of the other heroes into forced retirement. Now of middle age, Wayne tries to drink his sorrows away with liquor and with racecars. But the rush of being a crime fighter has never left and when Two-Face returns, he once again becomes the Dark Knight. Nice voice acting, a cool soundtrack, decent animation, worth it if you love the Bats. 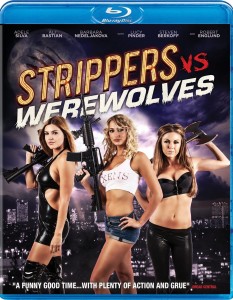 STRIPPERS VS. WEREWOLVES – First off, don’t be fooled by Robert Englund “starring” in this movie has he is only in for maybe 5 minutes. Second, I love me some good/bad horror movies. And Well Go USA is cranking out some really good ones lately. Obviously, by the title, you know what the movie is. A bunch of hot British chicks (some nude, some not) get wrapped up in a battle with werewolves. But these chicks ain’t going down without a fight and they plan on taking a few of the bad doggies with them. It’s stupid. It’s pure no-brain entertainment. But that’s why you’ll like it. 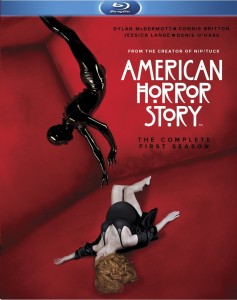 AMERICAN HORROR STORY: THE COMPLETE FIRST SEASON – I was skeptical as much as the next person that this could be anything more than just a lame attempt at playing off the horror angle to get another drama on the air. Not even close. AMERICAN HORROR STORY follows a family that moves into a new house in hopes of getting off to a fresh start. Bad idea. The house is actually well known in the town as being a place where people were murdered in various ways. It gets better. The spirits are still there, trapped in the place they died. What follows is a series focusing on the spirits and the not-so lovely way they died and all the sex, violence and revenge that follows. As the show airs on FX it is more graphic than would be shown on networks so be careful who watches it but for horror fans it is a great pick up. 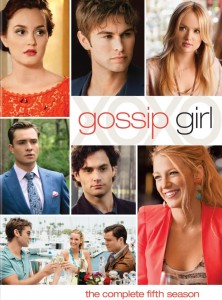 GOSSIP GIRL: THE COMPLETE FIFTH SEASON – A buddy of mine once told me the reason why he watches GOSSIP GIRL. Then showed me hot photos of Blake Lively and Leighton Meester. Having met Lively at Wondercon two years ago during her tour for GREEN LANTERN, I agree. Anyway, GOSSIP GIRL on the other hand isn’t going to be one of those series you can just pick up and start watching. You kinda have to know the back story and so I imagine most people checking this out will be those that have watched the series before (even on live television or through renting/buying the DVDs). Expect loads of secrets, sex, betrayls and good looking people doing all sorts of bad things to each other. But that’s why you watch, right? 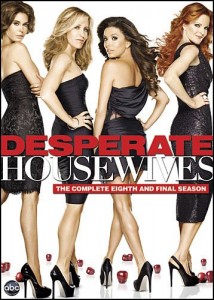 DESPERATE HOUSEWIVES: THE COMPLETE EIGHTH AND FINAL SEASON – Having been forced to watch DESPERATE HOUSEWIVES for the first four seasons, I pretty happy that this is the final season. Luckily, they seem to have 86’d the show before it became a parody of itself – I mean how many people can die on the same block year after year without a full investigation really? Apparently, some will live and some will die in the last season, which probably should have been ended a few seasons ago given some of the fan reaction. But there is no denying there are still fans out there and those that watched every Sunday with baited breath. So here’s your chance to own the last season or wait until the full boat comes out in a year or so.