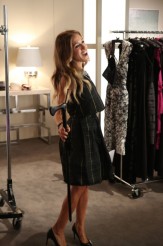 As the show continues to get a makeover, so do the characters 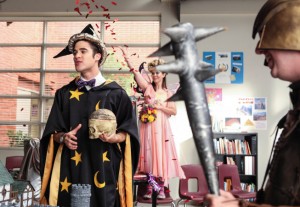 Like last week’s episode “Britney 2.0,” the latest episode of GLEE dubbed “Makeover” is wading in familiar waters rehashing old stories and trying to find a way to move forward.

The thing that’s fascinating about the series though, is that it’s more than aware of the mistakes and troubles it faces (and comments on them in a very meta way) and even when the series embarks on lazy storytelling, the show is aware of that too.

At McKinley, Mr. Schue (Matthew Morrison) is bored and wants to take a sabbatical to recharge his batteries. Blaine (Darren Criss) wants to be somebody. He even reminds us he left Dalton Academy to join McKinley so he could be with Kurt (Chris Colfer) who has since graduated and left for New York.

There are some similar loneliness moments with Blaine that echoes the same loneliness Brittany (Heather Morris) was feeling last week with the absence of Santana (Naya Rivera).

In order to make himself feel better, Blaine runs for class president against Brittany, and they both run with vice-presidents for no reason whatsoever – a comment that Sue Sylvester (Jane Lynch) even brings up.

The running mates include Artie (Kevin McHale) teaming up with Brittany and Sam (Chord Overstreet) pairing up with Blaine.

Blaine wins and there’s a very strange moment where Brittany appears to actually be attracted to Sam. She’s with Santana, but I guess it’s obvious she does swing both ways.

Meanwhile in New York, GLEE is finally starting to become refreshed. Kurt applies for a job as an intern at Vogue Online working for a slightly in-over-her-head boss Isabelle (played expertly by Sarah Jessica Parker). It’s so refreshing to not have a nasty vindictive character introduced. Parker is great, and has incredible chemistry opposite Colfer. Their scenes together are some of the strongest the show has had all season.

Working at Vogue, it also allows Kurt to give Rachel (Lea Michele) a makeover. And with Finn (Cory Monteith) still not reaching out to her from the Army, she’s starting to give in and fall for Brody (Dean Geyer).

And this wouldn’t be TV if Finn didn’t show up on her doorstep at the end of the episode – just as she’s about to make out with Brody.

While it’s starting to become a stretch that just about the entire gradating class at McKinley are showing up in New York, I’ll give the series that little gimmee, as long as they continue to make the stories engaging and different.

Songwise, this week is another bust. Blaine sings the terrible Tears For Fears song  “Everybody Wants to Rule the World”. The choreography is hilarious and actually quite good, but, I hate the song and the arrangement doesn’t improve the tune at all.

Slightly better is “Celebrity Skin” by Hole. Brittany and Sam do a duet with it. While it’s a rocker and Morris struggles during the first part of the song solo, by the time the two are singing in harmony, it’s actually quite good. It also breaks up the monotony of the show tunes and bland modern pop songs GLEE incessantly trots out.

“The Way You Look Tonight”/”You’re Never Fully Dressed” combo with Isabelle, Kurt and Rachel is a cute moment in the show, but again, the songs are rather unexceptional and surprisingly Rachel and Brody singing Sheryl Crow’s “Change Would Do You Good” is utterly forgettable (and I love Crow).

So where does that leave GLEE? It’s soon going to leave McKinley rudderless without Mr. Schue, for a little while at least (if that’s what they’re hinting at). We have a neutered Sue Sylvester, which I think is a good thing (sort of), New York is better for the show than I expected and the series itself has fallen into a rut when it deals with its high school plots.

Is the show better for this?

It’s still to be determined. GLEE has always had its ups and downs and currently its in a down cycle as it tries to reboot itself. I have faith it will find its way, but something tells me the show is better off picking New York over Ohio for its destination and sticking with it. Splitting time between both is proving to be a little too schizophrenic and if the writers can’t make the stories at McKinley as engaging as the New York side of things, the show is in big trouble indeed.