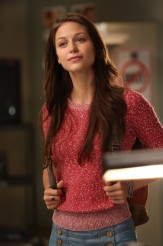 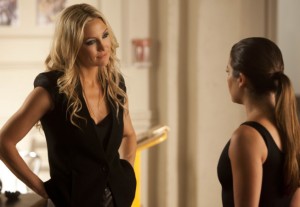 A lot has changed for GLEE and the show choir New Directions as Season 4 begins. After a Nationals win last season, the Glee club has become surprisingly “popular.” Always on the outside, they’re now on the inside and it’s affected everyone’s ego.

And everyone wants to be the new Rachel (Lea Michele) now that she’s gone off to New York to pursue her dream at NYADA.

Being part of the cool kids doesn’t suit the Glee club well, and the nastiness, thankfully, is short-lived as they realize by episode’s end that they’ve become jerks. Nice to know people can completely change their attitude in less than 45 minutes.

The series looks like it’s going to split the difference between its graduated class and its incoming group of singers (and remaining high school students at McKinley). This structure seems to be successful for the most part. Rachel misses home, and has a terrible experience with her new dance instructor Cassandra July (Kate Hudson) – a boozy version of Sue Sylvester I guess. She also misses Finn (Cory Monteith) who joined the military, but is now having eyes for a new hunky fellow student Brody (Dean Geyer).

Meanwhile, back at McKinley, the students are auditioning for new singers and find two strong prospects. Marley (Melissa Benoist) whose mother is the overweight cafeteria worker (she’s not embarrassed by her, but her mom doesn’t want the kids to look at her poorly) and Jake Puckerman (Jacob Artist), Puck’s younger and angrier half-brother.

The new additions are interesting – I particularly like Marley since she adds softness to a show wading in a sea of bitchiness. She seems grounded, down-to-earth and real – and hopefully she stays that way. Artist is also quite good – both as a singer and as presence. It will be interesting to see where they take him too.

Alex Newell returns as Wade Adams (aka Unique) who is now attending McKinley and Sue had her baby and Kurt (Chris Colfer) is hanging around the hallways because he has nothing better to do.

By episode’s end, Curt is encouraged to head off to New York and pursue his dreams on his own terms – and to be Rachel’s new roommate.

There’s a ton of story to chew through and writer and co-creator Ryan Murphy does an admirable job of rebooting. Even the idea of “The New Rachel” is funny, because the show itself is trying to find ways of replacing old people with new people.

For example, Unique has filled in the shoes of Mercedes and Kurt, while Jake will likely carry the angry Puck card.

Marley, clearly is the new Rachel, but in a humble way – and that’s perhaps the best part about the reboot. I’m rooting for this character and Benoist to recharge the show with some new, fresh blood. So far, it’s working.

Songwise, this isn’t the best GLEE episode. The dreadful “Call Me Maybe” number just didn’t work and all the other songs were pretty forgettable too. In many ways, I was more invested in finding more out about the story shifts than having people breakout and sing – at least for this week.

So a good job overall of finding a way to have your cake and eat it too. It’s only one episode and as GLEE has proven in the past, it can go off course and derail itself pretty quickly if it’s not careful, but I’m willing to give it some additional sampling before I start sharpening the critical knives.