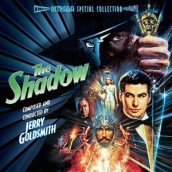 Jerry Goldsmith knows what evil lurks in the hearts of men 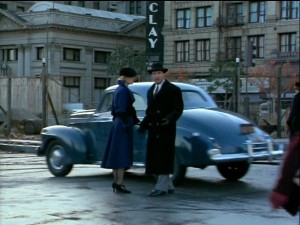 First heard on the radio in 1930, The Shadow set the tone for the archetypical playboy-cum-superhero, a man of leisure whose real nighttime activity was trading in his tuxedo for an ominous crime-fighting outfit, one that struck fear into the hearts of common thugs and super villains alike. Though The Shadow found popularity every medium from to the airwaves and comic books, it somehow took about sixty-three years for handsome Lamont Cranston and his ugly alter ego to make their big screen debuts. And like such wonderfully entertaining retro box office busts of the time as THE ROCKETEER and THE PHANTOM, THE SHADOW was suffused with great art deco design, delirious energy and a welcome sense of right and wrong innocence, though Cranston certainly had more psychic psychological baggage than a guy wearing a jet booster, or one dressed in purple tights.

It’s this offbeat, supernatural element that made Jerry Goldsmith an ideal composer to inhabit Cranston’s crooked nose and black fedora, bringing old-fashioned orchestral heroism, Asian intrigue and spooky electronics into this thoroughly fun score, which now gets its long-awaited complete release via Intrada Records’ two-disc set. With a magic touch for action that could be as bombastic as it was graceful, Goldsmith provided the final injection of steroids to truly pump up such Stallone and Schwarzenegger vehicles as FIRST BLOOD and TOTAL RECALL to ludicrously entertaining heights. Yet even with numerous, blasting scores to his credit, THE SHADOW marked the only other comic book score that Goldsmith composed next to 1984’s SUPERGIRL. 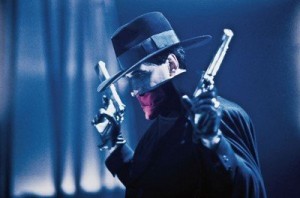 Where that soundtrack had a adventurously buoyant, happier touch befitting an innocent teen from the planet Krypton flitting about Earth’s upper atmosphere, THE SHADOW‘s darker movie origin finds Cranston (Alec Baldwin) as a morally bankrupt bad-ass who gets a mystical do-gooding conversion in Tibet, courtesy of a boy monk and a snarling golden dagger called The Phurba. Cranston returns to 1930’s NYC, transformed into a trench-coated, dual gun-toting wraith with telepathic and illusionary powers- a hero always in conflict with his baser self, not to mention his creator’s murderous usurper Shiwan Kahn (John Lone), who’s arrived with his army in the goal of becoming the next Genghis Khan.

These are exotically fertile poppy fields for a testosterone-fueled composer to trip on. And just as HIGHLANDER director Russell Mulcahy handled this material with flair, Goldsmith brought a wit, and excitement to the score that borders on camp delirium, but without ever falling into it. His main, brassy theme has a lavish, heroically skulking feel that’s usually accompanied by the patter of keyboard percussion and the pings and washes of sonar-like electronics, musical effects that probe into the darkness that the Shadow calls home.

Like David Newman’s approach for THE PHANTOM (just out on La La Land) Goldsmith’s seamless integration of then-contemporary synths and old school orchestra simultaneously place this crime fighter in the golden age, while making him of the multiplex moment. It’s also a sound that’s very much part of Goldsmith’s classic “sci-fi” vibe from a run that included such gems as INNERSPACE, LEVIATHAN and RUNAWAY, when Goldsmith’s enthusiasm at combining electronics and the orchestra reached its genre zenith. 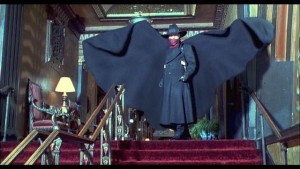 But no matter if the movie was fantastical or not, Goldsmith’s work resonated for the dazzling amount of themes and motifs he packed into any given score. “The Clouded Mind” establishes many of THE SHADOW‘s,  from a woozy brass effect that stands for the hallucinatory powers that Cranston and Kahn wield to Oriental percussion that’s both fierce and playful. The super-heroic, and supernatural East meets West aspect of the score gets particular good play in  “Don’t Open It!” as eerie, “Tibetan” horns jam with Goldsmith’s piano-led, swirling action, his Shadow theme taking on a symphonic majesty worthy of Vejur. It’s an awestruck sense of slowly voyaging through the great beyond that he frequently uses to build on The Shadow’s supernatural street cred, and is perhaps the most STAR TREK: THE MOTION PICTURE like with the addition of scratchy brass in “The Call.”

A trip into Cranston’s “Sanctum” is a rollicking whirlwind of way-out synth effects and a blasting theme, the cue at once tipping its fedora to the character’s comic book goofiness, and his iconic greatness. Yet one of THE SHADOW‘s most effective cues is also its most subtle, as Cranston’s meeting of the minds with Kahn in “Who Are You?” uses electronic atmospheres in a way to create a melodically seductive sense of the uncanny. But if there’s a real highpoint to the imposing grandeur that Goldsmith brings to the material, it’s in the soaring theme that reveals “The Hotel” that’s been masked by Kahn, music that doesn’t so much suggest an edifice as it does some cosmic entity. 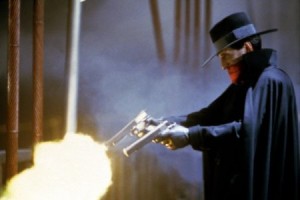 THE SHADOW‘s action picks up in “Chest Pains,” as his trumpeting theme joining with the composer’s trademarked way of using piano and strings for rhythmic excitement, their exhilarating rush joined by a percussive Asian motiff for Kahn’s soldiers in perhaps the film’s most memorable moment, as Cranston un-shadow’s himself from being pinned to the wall by their arrows. When the motif shows up again for “The Tank” and “The Dream” in all its clopping glory, the effect is nearly jig-like, abetted by the breathless, cliffhanging energy that Goldsmith gives another of Cranston’s near-death experiences. An equal master of lush romance, Goldsmith is also sure to give Penelope Anne Miller’s love interest a sweetly romantic melody for flute and keyboard in “Secrets” and “Do You Believe,” with the danger of getting wrapped up with this mystery man given a fun, tenuous tone in “What I Know.”

Perhaps the coolest music to be unearthed in this long-awaited Goldsmith bottle cap excavation are two versions of “The Mirrors,” which plays for the final showdown between Cranston and Kahn. The movie take is up first, with its near five minute length more than time enough for playful suspense and lurking about the darkness, as Goldsmith brings just about every theme and motif together to smashingly exciting effect. Directly following in a good move of album sequencing is the original, shorter version that’s even more breathless as Goldsmith rousingly brings together the numerous ideas he’s been building throughout like some thematic whirlwind. 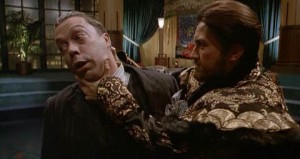 Beyond revealing the full scope of Goldsmith’s work (which is again interestingly chronicled by Goldsmith expert Jeff Bond), Intrada puts the original Arista release on the remainder of the second CD. Where this service for true completists can sometimes get redundant in the minutia of different edits between movie score and soundtrack presentation, there’s enough entertaining source stuff from music supervisor “Jellybean” Benitez to make a second listen worthwhile, especially Taylor Dane’s song “Original Sin.” Sounding like the second cousin of “Tonight Is What It Means To Be Young” from STREETS OF FIRE, it’s no wonder that its writer is the very same Jim Steinman, the Meatloaf lyricist supreme who gives the same rush of a power-pop anthem to his hugely enjoyable torch song. Shinoa’s far more traditional jazz tune complements the period flavor with the swaggering big band backdrop of “Some Kind of Mystery.”

Further 1930s swing is provided by Dennis Dreith in the album’s bonus section. No shirk when it came to comic book scoring himself with Dolph Lundgren’s “The Punisher,” Dreith is just as capable in evoking the era with happy-go-lucky jazz. And you’ve got to love the album’s bookending kitsch factor, begun with Alec Baldwin’s hilariously mutated voice, and concluded far more sonorously with radio Shadow Orson Welles, who signs off with the most memorably boastful claim of any pulp hero.

There’s a real delight to the fully unclouded SHADOW that’s a thrilling return to the days of yesteryear.  At the portal of his own final years, Goldsmith’s score doesn’t so much suggest a composer at the top of his big theme game as much as it does a kid leaping about his studio with black cloak and twin popguns in hand, play acting with heroically fearsome earnestness, while managing a wink to the audience. As such, THE SHADOW is pure Goldsmith exhilaration that makes one wish he got to play far more pop culture heroes, particularly ones as timelessly distinctive.